Manager Alex Neil felt his team were ‘at it’ from the off in their excellent away win at Queens Park Rangers. 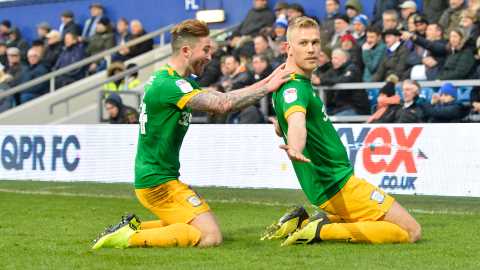 19 January 2019
The Lilywhites demolished Steve McClaren’s side thanks to first goals for the club for Jayden Stockley, Jordan Storey and Brad Potts, plus Alan Browne’s ninth of the season – his first away from Deepdale – giving the team a 4-1 win at Loftus Road.
It was the first time they had won three games in a row in Shepherds Bush and it was no more that they deserved, as they dominated the game from the outset and the manager felt that it was a performance that reflected those which had served them so well in the previous campaign.
“That was very reminiscent of last year,” he told iFollow PNE. “What we have to bear in mind, is that of late, if you look at the team from last season and you look at the team that has been playing of late, it is quite unfair to ask a lot of the lads we brought in the summer.
“When you have five or six in the team it is difficult for them all to gel at the same time. What you want to do is to make sure that you give them a really good opportunity, surrounded by the lads who know how we perform and how we play and I think it has been tough for those lads and unfair really.

“When you go into a team, you want to go into a stable environment and today it showed that when you get the lads in who have done a job for us in the past - even with Pottsy and Jayden coming in - the rest of the lads know how we work, how to get it done and I thought you could see today how much we have missed some of those players.”

The gaffer’s tactics, with a 4-1-4-1 formation, with two number tens supporting Stockley seemed to catch the Hoops off guard and Alex explained that the plans had worked perfectly.
“We had two running tens who worked in behind them and Gally just dripped in, so that the full back could not pick him up and that made that extra man in the middle and it worked really well and we damaged them,” he continued.
“Their repair was that their two full backs then sat in and didn’t match up, which means we needed to move the ball quicker at that stage and that’s what we wanted to do – make them surrender possession, so that we could dominate the game and hopefully try and build from there.
“It worked really well. They obviously then put [Matt] Smith on to try and go really direct and at that stage it was a case of ‘can we compete and make sure we are tight enough when the ball goes up?’ Because he was going to win his fair share and then when we got it, we had an extra man in the middle, so could we then move the ball and keep possession and try and pose them problems and, to be honest, we did all of that.
“I thought the lads today were fantastic.”
The PNE boss was also delighted for the travelling following, with nearly 1,300 making themselves heard throughout.

“It is really pleasing to give our fans that kind of performance.

“We haven’t been at our strongest in terms of personnel; we certainly haven’t played at our strongest off the back of that, but when we get everyone back in and competing for slots, rather than slots being given up because no-one else is available, the pleasing thing now if you can see the lads and how much it means to them and I thought today we were really at it.
“We were determined from the start – first balls, second balls – and then the quality comes through when you do that,” he added.
Watch the full interview with Alex, including his analysis of the four goals, as well as the influence of the returning Ben Davies by clicking on the video at the top of the page later this evening.