Preston North End’s new No.44 Brad Potts is hoping that he can add to his already significant number of games with the Lilywhites. 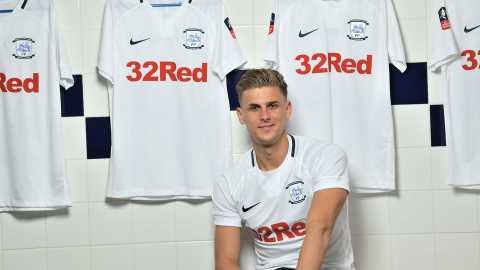 3 January 2019
The 24-year-old signed a three-and-a-half-year deal at Deepdale on the third day of the January transfer window and arrives in form, after seven goals in 26 games so far this season for former club Barnsley.
And having played almost 300 career games, despite his still relatively young age, he hopes the experiences he has gained at his previous clubs can assist him with his new employers.
“When I was at Carlisle I broke into the first team when I was only 18 and played a lot of games there,” he told iFollow PNE. “I got the move to Blackpool and then Barnsley, so I have a lot of experience of playing games in League Two, League One and the Championship, so I will try and use that experience here and push on.
“I have played a lot of games in my career already and I am only 24 and I wasn’t to carry that on and play as many games as I can for PNE.

“I have scored a few goals this season. I knew that having got relegated we had to bounce back and on a personal level I wanted to do that as well, scoring and assisting as many possible and Preston obviously noticed that and I am thankful that they have brought me here.”

North End’s swift action in the January transfer window sees the new No.44 quickly follow Josh Ginnelly and Jayden Stockley through the front door and he is looking forward to getting started, even though – like the other two – he will have to wait ten days for a potential debut.
“I knew there was interest, but then I found out on Wednesday that the bid had been accepted and I was delighted with that and I couldn’t wait to get over here and get it all started,” he continued.
“I know the area from being around here before I have played at Deepdale a few times and it has always been a good atmosphere – it is a big club and a nice ground and I am really looking forward to it.
“The last time I played here I scored my first goal for Barnsley, so I was delighted for that at the time, but I am looking forward to scoring goals for Preston North End now.

“Maybe it is a good thing that I have got ten days to settle in, get to know the lads and get ready for next weekend’s game against Swansea.

“I had a chat with the gaffer when I first got here and he told me what he wanted from me and I am looking forward to hopefully doing that for the team.
“A few lads I have played with, have played under the manager at previous clubs and I have spoken to them and they only have good things to say about him, so I am really looking forward to working with him.”