Preston North End’s new goalkeeper, Connor Ripley, is looking forward to the next challenge in his career, after completing his permanent move from Middlesbrough. 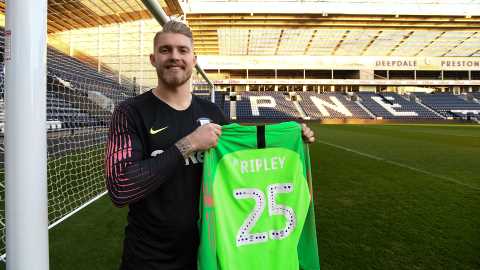 9 January 2019
The new Lilywhites No.25 signed a three-and-a-half-year deal to become manager Alex Neil’s fourth signing of the January transfer window and admitted that this was an important step in his career.
Speaking to iFollow PNE after putting pen to paper he said: “It is a big move and it is a big change as well. I have been at Middlesbrough as long as I can remember and it has been a great club for me, but I was at the stage where I needed to move on a find another challenge.
“It is a big move in terms of the next part of my career. Geographically it is good for me; my partner is from Bolton, I have lived around here and my mum and dad live around here, so that is good.

“It is a step up for me, but I think I am ready to play in the Championship. I’ve stressed in a few interviews that young goalkeepers need to go out and play as many games as possible and I have played over 150 games now, so I am not inexperienced, which is critical for me.

“I have gone and done that dirty work. I have to had to drop down the leagues, I have even gone to Sweden, so I wasn’t scared to find games in other places. All that work has paid off and now I am at a great club like Preston North End.”
The 25-year-old was recalled from a loan spell at Accrington Stanley to allow the transfer from Teeside and he was very complimentary about his time at the Wham Stadium.
“The manager, the staff and the goalkeeping coach at Accrington were fantastic and I can’t thank them enough,” he continued.
“The fans were great there too, they were so welcoming and that club has been a pivotal part in me getting this move and I would like to thank them for that.”
However, with that part of his career over, he is now looking to kick on and compete. He already has at least one familiar face in the dressing room and can’t wait to get started.

“I’ve played here before and I have really enjoyed the stadium, it is beautiful. The fans are good and I’m looking forward to getting started now.

“It is a special position. Not many people like to be a goalkeeper and not many can be. Unfortunately, there is only one position and we all have to fight for it. Declan Rudd is a great goalkeeper and I need to fight for my position.
“I know Moulty [Louis Moult] well. We have been exchanging texts. He is a great player and he come here and scored some goals and that is what he has done best, I will look forward to seeing him again.
“It settles you in nicely when you know someone. I have had a chat with the manager as well and he has told me that it is a great group of lads, who are easy to get on with and I can’t wait to get started and crack on.
“I have not come here to do nothing. I am here to play and to play a pivotal part in the season. I will do my best on the training pitch and try and prove to the players and the manager I should be in the team.”

Watch Connor's first interview with the club on iFollow PNE by clicking on the video above.