Daniel Johnson said Preston North End must turn their attentions back to Championship action following their FA Cup exit at the hands of Doncaster Rovers.

The Yorkshire outfit were 3-1 winners at Deepdale with goals in the final 20 minutes from Tom Anderson and Mallik Wilks proving the difference, as North End exited the competition at the third round stage. 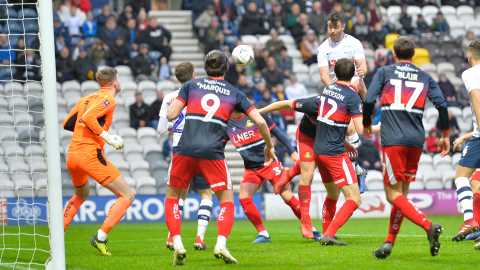 Speaking to iFollow PNE post-match, the 26-year-old said that after Andrew Hughes had levelled for the hosts in the opening moments of the second half, following John Marquis fifth-minute opener for Doncaster, he felt North End had been the side most likely to emerge from the game with a victory.

“It was a bit crazy, to be honest,” DJ said of the game. “Obviously they went 1-0 up in the first half, we went in [at half-time] and the gaffer said we needed to make a change in the second half and I thought we did that.

“We went out there and made a difference, we got the goal and it looked like there was only going to be one team to win it. Unfortunately for us, they went on to score the set piece and obviously the third goal.

“We piled the pressure on and we started doing things that we knew we could do; passing the ball and making runs. We got the goal, it was just unfortunate for us to concede the set piece and we had to chase the game from there.”

North End are back at Deepdale next weekend for the visit of Swansea City as league action returns to Deepdale and the midfielder stressed that despite the disappointment of this cup exit, the side’s focus must now turn to that game.

“That’s what we’ve got to do, just focus on the next game and go out there on Saturday and put in a performance,” he continued. “Seani [Maguire], [Alan] Browney and a few more of the boys are back now, Brandon [Barker] and Josh Earl too.

“We’ve just got to kick on and get the performances and results. Like I said, we’ll put this behind us and we’ll get ready for Saturday.”

More from DJ is available now on iFollow PNE.