Alex Neil was satisfied by his ten-man Preston North End side taking a point from Swansea City’s visit to Deepdale but stressed that plenty of work remains to be done for his new look squad in the coming weeks.

A combination of four new January arrivals and the easing of an injury crisis over the festive period meant the gaffer could make six changes from the previous weekend’s game against Doncaster Rovers in the 1-1 draw against the Swans. 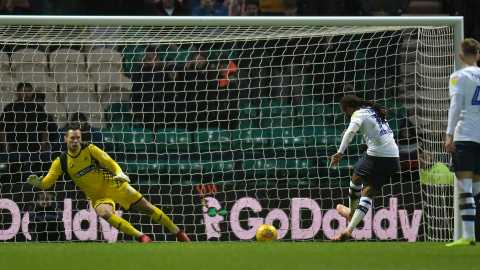 Brad Potts and Jayden Stockley made their debuts while Alan Browne and Ben Pearson returned from injury and suspension respectively and although pleased by a couple of individual displays in the draw, the gaffer said his players need to continue working on gelling together as a unit.

“I think it was a hard-fought point,” Alex told iFollow PNE post-match. “We’re comfortable and happy that we got something from the game and also with guys returning from injury to the team today and also the two signings in the team.

“We’re going to have to just adapt to that and it might take a little bit of time for that.”

Focusing on the performances of January signings Brad Potts and Jayden Stockley, Alex felt there was encouragement to be taken from the displays of the two new men.

“He’s a midfield runner, Brad [Potts]; he’ll get into the box, create opportunities and chances and he’s got a decent strike from distance as you can see. Individually we had some players who played well but what we need to do is gel and try to gel quickly.

“We can still learn to play round Jayden [Stockley] a bit better than we did, at times he was a little bit isolated and we could’ve got support up to him quickly, but he was a handful; he made it difficult for the two centre backs, took it and linked it. We didn’t probably supply enough quality crosses today to see his effect in the box as well. There’s certainly things to work on but it’s a good point for us.”

North End finished with ten men as Josh Earl saw red for two bookable offences, the gaffer feeling that decision was harsh but pleased by his patched-up side’s reaction to see it out for a point.

“When you watch it back, it’s very, very harsh, extremely harsh – in fact, you’d probably argue it’s not even a foul, never mind a booking certainly for the second one,” Alex said of Josh’s dismissal.

“The first one is just a bit of naivety being a young player and instead of trying to cut the lad’s angle off, he tries to fight through and try to get to the ball. Naturally we’re disappointed for him and frustrated because it makes that last ten minutes difficult, but the lads dug in and did what they needed to do.

“We bumped [Andrew] Hughes into centre back and I thought he did very well there. Alan [Browne] had to go to left back because obviously Josh had been sent off and we’ve lost Tom Clarke [to injury] as well. We were young at the end and we had guys out of position, but they all fought to a man to make sure we secured the point, so that was pleasing.”