In an extended interview with iFollowPNE after signing his new contract, Paul Gallagher said he hopes to earn another promotion with the club. 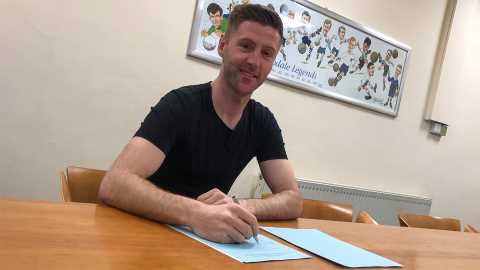 Paul Gallagher Extends His Contract Until 2020

24 January 2019
In a ten-minute chat with the No.12 – which you can watch in full by clicking on the video at the top of the page – Gally said that his relationship with manager Alex Neil was one of the biggest factors in quickly agreeing to stay at Deepdale and that his aim now is to try and get the club into the Premier League.
“The trust between the manager and I is massive,” the 34-year-old said after extending his North End stay until at least the summer of 2020.
“If I have a question, I will always go and ask him and vice versa, he will ask my opinion and I will always give my honest opinion. He might not agree with it, but that’s what I think he likes.

“I am an experienced player who has been lucky enough to play at the top levels and I am still trying to do it at this age – I am not just happy to be in the Championship, I want to get higher, as we all do at the football club.

So, my relationship with the manager is very good and long may that continue – I am really enjoying playing for him.”
Paul didn’t have to be asked twice when the option to extend his deal was put on the table and he feels he is still improving, even as he approaches his 250th appearance for the Lilywhites.
“It has always been at my ambition to stay at this football club as long as I possibly can,” he continued. “It drives me on each day to try and get better and I feel with age I am doing that and I still have a lot to give on and off the pitch.
“Over the last few months, I have really enjoyed being part of the team and earning a new contract is pleasing.
“I have always had it in me that I want to strive hard and do the best I can. I will know when my time comes to hang up my boots, but right now I feel I have plenty to give to this team.
“When I signed my new contract in the summer it was discussed then that if I was playing and having an influence, then we would sit down again.
“This club has always been good to me and they have stuck by their word. The manager came to me and said ‘you have been fantastic, we want to offer you a new contract’, and he knew I was going to say yes, and now I can just carry on playing.
“I feel like I am contributing to the team and playing well and I hope to keep doing that as long as possible.”