One of the five new faces through the Deepdale doors since the opening of the transfer window, Jayden Stockley is adapting to life with the Lilywhites. 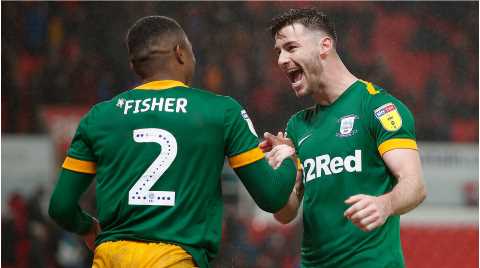 28 January 2019
The centre forward has started all three games he has been eligible for since he signed from Exeter City in the first week in January, with the side taking seven points from an available nine.
And returning back to PR1 this Friday night, in front of the Sky Sports cameras, the North End No.20 is looking forward to the next test.
“I am looking forward to it. There are so many big teams that you play against every week, it is brilliant and I am excited every time there is a new game coming up,” he told iFollow PNE at Springfields to look forward to the live television clash with Frank Lampard’s Derby County.
“Everything is quite new for me, but I am looking forward to the challenge. It has been excellent and it has coincided with some really good form for all the boys, so it has been very enjoyable to come into the team.
“Last Saturday was tough, but personally it was a great challenge to come up against some experienced centre halves – people I have watched on telly and respect a lot – so it was great to come up against them and I was proud of how all the boys performed.

“They have made it a nice atmosphere for me to come into off the pitch and I am buzzing with the start, but keen to learn from every game.”

A January transfer window move means plans thrown up in the air and for Jayden it meant moving 250 miles north, so how is he settling in to life in Lancashire?
“It is a bit of a manic rush when you move in January. One week I was playing for Exeter and the next I was playing for Preston North End,” he continued.
“It was a new experience for me; I have never done that before, but everyone seems to have hit the ground running.
“There’s a lot of change that happens in football and you just have to roll with it and that is something that personally I have been looking to do and the gaffer and the staff can take full credit for that, because they have brought us into this environment and asked us not to change too much and hopefully learn from every game we play.

“Every game I have played so far has been different and I just want to pick up little tips – watch the opposition, see what is working and try and gain relationships around the pitch with our boys.”

It’s Friday night lights this week, with the Rams heading to Deepdale and the 25-year-old striker is comfortable with the spotlight being on the away side.
“Their gaffer has got an exciting team and some big players and if the focus is on them, then fair enough; they have been good this season – in the cups as well – but it will suit us to go unnoticed.
“We have got one hell of a squad here – I have been speaking to some of the boys and seeing the quality around training will hopefully make me a better player, just getting the chance to train with them.
“We will work on our side of things and go all out. I am looking forward to playing at home again, since my first game we have had two away games, so I am desperate to get back to Deepdale,” he added.