Callum Lenton felt his younger team-mates made encouraging strides in what was, for most of the remaining members of the starting line-up against Shrewsbury Town, their first experience of U18 football.

The Lilywhites had an even younger side out than usual in the 4-1 defeat, although the home side had remained very much in the contest throughout, with only three quickfire second half goals from the visitors taking the game away from North End's particularly youthful outfit..

And Lenton, making his first start of the season on his 18th birthday, said the five U16s and five more U15s could take encouragement from their performance, with only Jacob Holland-Wilkinson and Aaron Bennett of that group having played at this level beforehand. 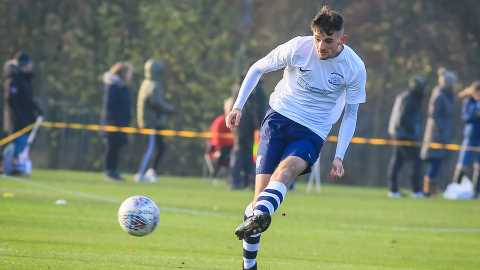 “They’re young players and it’s the first time for many of them playing for the U18s,” the second year scholar told the club website.

“It’s a proper league game and as one of the older boys, I’ve tried to step up and be like a second captain and make sure that they’re doing their jobs by putting in challenges and working hard for each other.

“I thought in terms of winning challenges, they were excellent. They just need that bit more communication between themselves and they should be fine.

“Playing with 16 year olds, they maybe need to start talking to each other a bit more, but I thought they did well considering they were playing against a much older side than us.

“With a bit more fitness, I think we could’ve ended the game better. Credit to Tyler [Williams], Joe [Blanchard], Levi [Lewis] and Harry [Huddart] in the back four, because I thought they defended excellently.”

On an individual note, despite making a string of saves – including one to deny Jack Leask from the penalty spot in the second half – the 18-year-old said he wanted to make improvements on his own performance but hoped he had done enough to earn some more game time in the near future.

“I thought I could’ve done better but it was brilliant to get the 90 minutes in me,” he continued. “We started well and it was very good link up between Jacob [Holland-Wilkinson] and Darren [Brannigan], who put us ahead with a good strike across the ‘keeper.

“Unfortunately I came out and saved it initially [for Shrewsbury’s equaliser] but obviously we just couldn’t quite defend that second ball and they scored.”

“I love to decline people of scoring opportunities, especially if they’re on a hattrick. I knew which way he was going with the penalty and obviously I had to step up to save it.

“I hope my performance can allow me to have more game time. My kicking could’ve been better in the first half and at the other end we just need to finish our chances more.”