Louis Potts hopes the youth team can replicate their display from beating Accrington Stanley 3-1 in league action when they host the same opponents in a Lancashire FA Professional Youth Cup semi-final on Tuesday.

The frontman equalised for PNE immediately after Stanley had taken an early lead in Saturday’s league encounter, Jerome Jolly and Tyrhys Dolan later hitting the target in a convincing win. 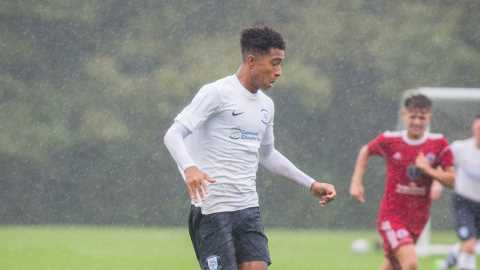 Although a number of the club’s scholars have remained active with the first team squad over the Christmas period, most of the young Lilywhites only returned to training on Thursday and the 16-year-old felt the performance was positive, especially given the lack of preparation time.

“It was a good win and quite a comfortable one for the lads,” the young striker told the club website. “We played well and everyone looked sharp after coming back for the New Year.

“We came back on Thursday and we’ve been doing our best in training, everyone looked sharp and we put that into the game and got the result we wanted.

“We went behind early on, it was a little bit of a mix up at the back but it was a good reaction. We got ourselves back straight into the game and then went onto to win the game 3-1 which was excellent.”

Only four minutes had been played when Accrington took the lead but Potts immediately pulled one back for the Lilywhites in the following minute, a pleasing moment for the forward.

“It was a great run by Ethan and I was lucky enough to be right where the ball landed,” he continued.

“In and around the six yard box, it’s always good to grab a goal there. That’s where you want to be as a striker so it was good to get one today.

“Once we get the first goal, the second and third came really well. We dominated from there and saw the game out comfortably.

“I think we could’ve probably grabbed a few more goals but seeing the game out was excellent. We did the job and that’s what we wanted to do; get the three points.”

The two sides will face off again on Tuesday afternoon with a place in the Lancashire FA Youth Cup final at stake and Potts hopes the team can perform at a similar level in that game.

“Hopefully we can do the exact same thing on Tuesday and go on into the final.

“It’s a semi-final, so I’m sure the intensity will be a lot higher and everybody will be up for it. It will be similar in some ways and different in other ways but hopefully we can just get the job done again.”