A memorable victory over the Rams at Deepdale came back on 15th May 2005, as the Lilywhites gave themselves a huge advantage after the Championship Play-Off semi-final first leg.

31 January 2019
And it was a current Derby County man who scored the first goal for Billy Davies’ men on an early Sunday afternoon.
Richard Cresswell's late goal saw North End take control of their Play-Off tie. A defensive header striking Cresswell eight yards from goal and the ball dribbled past goalkeeper Lee Camp.
David Nugent scored PNE’s opener after collecting Chris Sedgwick's flick and slipping the ball past Camp.
Nugent also volleyed wide and Cresswell missed the target while Derby came closest through a Mo Konjic header that drifted inches wide.
The home side dominated the opening half while the visitors, after switching to 4-4-2, greatly improved in the second half.
But having enjoyed at least an equal share of the final 45 minutes, Cresswell's late goal meant George Burley's team had it all to do in the following Thursday's second leg at Pride Park – and we know how that ended!
Derby, already without influential duo Inigo Idiakez and Grzegorz Rasiak, suffered a further blow when Michael Johnson was stretchered off after just six minutes with a knee injury.

The Lilywhites welcomed back Eddie Lewis just three weeks after an operation on his appendix and the American was soon imposing himself upon the game as the home team dominated. 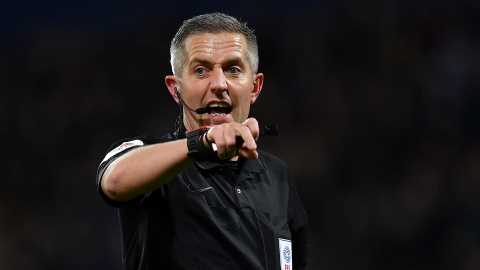 30 January 2019
His cross after eight minutes was headed goalwards by Cresswell and a mazy run from Lewis shortly afterwards opened up the Rams defence only for a poor final ball to elude Nugent.
A neat reverse pass then played Cresswell through, but the striker shot wide with only the goalkeeper to beat.
Camp was quickly off his line to smother at the feet of Sedgwick as PNE continued to push forward in front of their own fans.
And the goal finally came when Nugent burst through to collect Sedgwick's pass before diverting the ball superbly past Camp with the outside of his right boot.
The half-time whistle went without Derby having mustered a shot at goal and George Burley brought on Adam Bolder for Tommy Smith at the break, with Marco Reich moving alongside Paul Peschisolido up front.
But it was Davies’ side who continued to threaten, Lewis delivering a teasing free-kick that eluded everyone.
But Konjic came close to an equaliser, heading narrowly wide from a free-kick.
And Derby noticably improved after the break, winning more balls in midfield and enjoying more possession.

The visitors thought they should have been awarded a penalty when Ian Taylor, making only his second start in three months, went down under a challenge from Brian O'Neil.

31 January 2019
Nugent might have doubled North End’s lead with an eight-yard volley but, with Richard Jackson closing him down, the 20-year-old striker shot wide.
And in the last ten minutes a sharp one-two presented Nugent with another difficult chance on the volley, but again he missed the target from an acute angle.
But Derby's improved second half came to nothing when Cresswell's lucky goal extended the home team's lead.
Lilywhites boss Billy Davies said afterwards: "I'm pleased, but it's only half-time. The first thing I said to the players at the end of the game was exactly that. In the first 25 minutes I thought we played some wonderful football.
"We expected them to come back into the game, but it's a great result and a great performance."
Whilst Rams boss Burley added: "We've got a mountain to climb. Preston were celebrating as if they were already at Cardiff, but let's remember what the last score was at Pride Park.
"Preston's home record is exceptional, but their away record is not so good in the last season. We know Preston are odds-on favourites so we've got to give it our best."
PNE line-up: Nash, Mawene, Davis, Lucketti, Hill, Sedgwick, McKenna, O'Neil (Etuhu, 80), Lewis (Broomes, 89), Cresswell, Nugent (Agyemang, 86). Subs Not Used: Ward, Mears.
Derby County line-up: Camp, Kenna, Konjic, Johnson (Mills, 6), Jackson, Reich, Bisgaard, Taylor, Huddlestone, Smith (Bolder, 46), Peschisolido. Subs Not Used: Miller, Junior, Tudgay.
Attendance: 20,315
Referee: Mr A Marriner (W Midlands)