A ten-man North End battled hard to earn their first point of 2019, coming from behind against Swansea City at a soggy Deepdale. 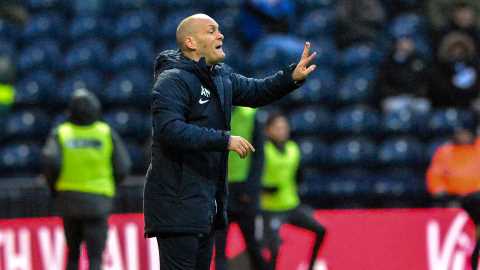 Gaffer Looking For New And Returning Faces To Gel

12 January 2019
Daniel Johnson scored the penalty spot for the Lilywhites, on the hour mark, after debutant Jayden Stockley’s cross had been handled by Joe Rodon, the leveller coming just five minutes after the visitors had opened the scoring through Courtney Baker-Richardson, pouncing from close range to slide home Bersant Celina’s pull back.
For Alex Neil, there were six changes to the side that had faced Doncaster Rovers in the Eirates FA Cup the previous Sunday, Declan Rudd and Tom Clarke returning into the defensive unit, with Brad Potts, like Stockley, given his first start following his move from Barnsley.
Ben Pearson and Alan Browne also returned to bolster the midfield, although the latter would finish the game at left back after Josh Earl was red carded for two offences referee Keith Stroud determined to be worthy of cautions, nine minutes apart in the second half – the Irishman also having taken the captain’s armband after injuries to both Huntington and Clarke.
The home side created the best of the chances in the first 35 minutes. Potts’ probing run at the heart of the Jack’s backline winning a free kick just to the right of the ‘D’ 15 minutes in, but Welshman Andrew Hughes couldn’t test Erwin Mulder in the visitors’ goal.
It was Potts again, wearing the No.44 shirt, who did test Graham Potter’s goalkeeper on ten minutes before the interval. A 30-yard piledriver forcing the stopper to palm the ball away, it almost spinning back over him into the net, until a quick recovery kept it out. The chance came after excellent midfield play from Pearson, nipping in to win the ball in the centre circle, before releasing his new team-mate.
Declan Rudd was also needed at the other end, making a fantastic clawing right-handed save by the diving away to his right to deny Celina, whose 20 yards curling effort, took a deflection off Connor Roberts, making it even more of a good stop.
The North End boss had to make a change at the interval, Huntington coming off, with Hughes dropping into the centre of defence and Earl coming on down the left, this coming six minutes before the interval.
It was the Swans who took the lead ten minutes into the second half. Wayne Routledge marched into the box through a left hand channel, feeding Celina, who got to the byline and pulled the ball back into the six-yard box for Baker-Richardson – in the side for the ill Oli McBurnie – who slid home from into the middle of the goal.
But the lead lasted only five minutes. Tom Barkhuizen fed Stockley into a right-hand channel and the rangy striker tried to deliver a cross into the penalty area, only to hit the outstretched arm of Rodon, the assistant on the Sir Tom Finney Stand side having no hesitation to wave his flag, leaving Mr Stroud to point to the spot.

Despite the delaying tactics of Mulder in the goal, Johnson calmly strode up and sent the keeper the wrong way, putting the ball in the right-hand side of the Alan Kelly Town End goal to level the game up. 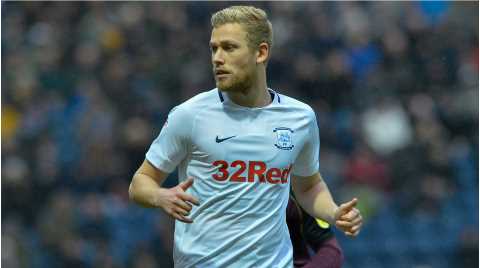 12 January 2019
At the half’s midway point, another injury blow for PNE, saw skipper Clarke forced off with a calf problem, Browne taking over the armband.
The manager, despite being forced to make two defensive substitutions due to injury tried to make a positive final alteration, with Sean Maguire brought on for his second run out since returning from injury, on for goalscorer Johnson, and the Irishman looked lively and could have put his side in front with his first touch.
The side broke well, Potts winning the ball in front of the home dugout, driving forward, stretching the City backline, before passing the ball into the feet of the Irishman in the right corner of the penalty area. The No.24 got the ball out of his feet and drilled an effort on target, but Mulder made a smart save and then denied Browne brilliant on the follow up, his first-time effort from 25 yards heading in, until the intervention.
Despite being in the ascendency at this stage in the game, the last ten minutes, plus five minutes of stoppage time, were made more difficult as the Lilywhites played this period with ten men. Earl’s first booking had come on 72 minutes, for his first foul of the game, his second was a crunching but clean challenge, however, it was not seen that way by the officials and a second yellow was produced - Browne now having to drop in to left back.
But the defensive unit did an excellent job and in fact in the final minute of stoppage time it was the Lilywhites who were the ones looking for the win, Maguire having won a corner, that Barkhuizen delivered to the back post, but with the ball bobbling around in the area, the referee blew up for full-time and both sides had to settle for a point.
PNE line-up: Rudd, Clarke (c) (Fisher, 67), Hughes, Pearson, Huntington (Earl, 46), Storey, Potts, Johnson (Maguire, 74), Stockley, Browne, Barkhuizen. Subs not used: Ripley, Gallagher, Ledson, Nmecha.
Swansea City line-up: Mulder, Van Der Hoorn, Fer (c), Celina, Dyer (Montero, 804, Routledge, Grimes, Rodon, Roberts, Naughton (McKay, 89), Baker-Richardson (Bony, 75). Subs not used: Nordfeldt, Carter-Vickers, James, Fulton.
Attendance: 11,604 (570 Swansea City fans)
Referee: Mr K Stroud