Taking charge of his first Preston North End game of the season at Deepdale this weekend is experienced official Keith Stroud.

10 January 2019
Last season, the Hampshire official took charge of two PNE games, both away from Deepdale, the first at Birmingham City back in September 2017, when goals from Tom Barkhuizen, Daniel Johnson and Jordan Hugill saw the side come from behind at the break to end Harry Redknapp’s tenure at St Andrews and the second, the win at Burton Albion in December the same year.
In 2016/17 his only game with the whistle for a PNE game was our loss at Brentford, whilst the previous season he also took charge of our game at Birmingham, as North End came from 2-0 down against what was then Gary Rowett’s men, with goals from Alan Browne and Greg Cunningham earning the Lilywhites a point.
That was his second North End game in two months after he took charge of the Lilywhites' home win over Sheffield Wednesday in February 2015, as well as PNE's last clash with a steel city side at Deepdale, 2014/15's FA Cup tie with Sheffield United. The win over the Owls was his last visit to Deepdale, so it will be almost four years since his last trip to PR1.

The official also refereed the Lilywhites Play-Off clash with Rotherham United in May 2014 as well as the previous season’s 3-2 home win over Ipswich, when Joe Garner scored a second half hat-trick as a substitute to knock the Tractor Boys out of the FA Cup at the fourth round stage. 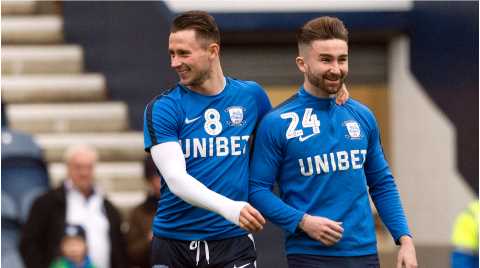 Alan Browne Says There Is ‘A Lot More To Come’

9 January 2019
His two previous league trips to Deepdale prior to that also saw wins, the famous 6-0 triumph over Cardiff City, which led to the Play-Offs in 2009 and a 2-1 win over West Brom the previous year, when the Lilywhites ended the game with nine men after the dismissal of both Youl Mawene and Chris Brown.
On Saturday back here at Deepdale Keith will be assisted by John Flynn and Matt Foley, with Martin Coy acting as the fourth official.
It will be Keith’s 16th game of the season, having so far issued 51 cautions and one red card, his last game being West Brom’s 1-0 home FA Cup win over Wigan Athletic on Saturday.