Lewis Simmons hopes the youth team can take encouragement from their three-match winning run into their upcoming cup matches, after sealing a third consecutive victory of 2019 at Carlisle United. 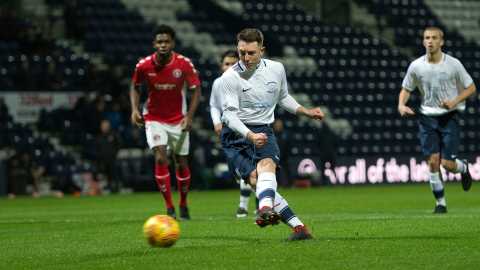 The young Lilywhites were emphatic 4-1 winners in Cumbria with Jack Baxter getting two and Josh Pollard and Adam O’Reilly the other scorers, this success following another pair of triumphs against Accrington Stanley earlier in the week.

Simmons told PNE.Com that attentions are beginning to turn towards the FA Youth Cup tie against Norwich City later this month, as well as a Lancashire FA Professional Youth Cup final against Wigan Athletic in April, and he hopes this current form can help the team in those cup competitions.

“We started well and we got the first two goals, from then on it was just about keeping the clean sheet throughout the game, but unfortunately we conceded with a minute to go which was a bit of a kick in the teeth.

“They didn’t really threaten us. They had maybe two half chances in the first half but obviously we conceded in the second half which was poor from our point of view.

“We’ll look back on it and reflect on it and then take it into the next two games, against Shrewsbury Town and then Norwich City in the FA Youth Cup, which are both important games.”

The 18-year-old is now the only player to have appeared in every youth team match this season but remains conscious of putting in the graft in training in order to retain his spot.

“I’m enjoying my football and I love playing week in, week out. It’s just a case of making sure I keep my place and that no one can take it off me.

“I don’t mind playing elsewhere but right back is probably my favourite place to play now. As I was growing up I played in many positions but I think now as a full back, as a number two, it’s the position I like most.”

The defender added that the winning start to 2019 has understandably lifted confidence levels among the squad, particularly ahead of that FA Youth Cup encounter at Deepdale.

“We just want to keep winning, keep getting points, keep putting in good performances and then see how far we can go, both in the cup competition we’ve got into the final of [Lancashire FA Youth Cup] and obviously in the FA Youth Cup.

“Confidence is high and now it’s all about preparation. We have to go into the FA Youth Cup game with the right mindset, being prepared and we can go in with that winning mentality because of these games we’ve won previously.”