Tom Barkhuizen is closing in on 100 appearances for North End and aims to add more as he looks to propel PNE towards the top six.

31 January 2019
The attacker will soon chalk up a century of appearances, he has 91 in the league so far and 95 includ-ing cup competitions, after signing from Morecambe in January 2017.
He has been involved in almost every game this season, he has come off the bench in the last two matches, wins over QPR and Stoke City, and he aims to continue to play a big part as North End look to move up from mid-table.
“I have played quite a lot of games over the last few years and it will be a nice one to achieve 100 in a relatively a short space of time. Hopefully there are plenty more to come,” said the 25-year-old.
“At the moment, parts of my game I have been frustrated with, other parts I have been happy with.
“I am on six goals, I scored eight last year, so in that department I am not doing too badly.
“You don’t want to be rested, but we were saying that it’s difficult because you can feel your performances getting a bit tired, a bit worse, as you physically can’t always maintain that level.
“Over Christmas, I found myself getting into really good positions and it’s maybe a bit of decision-making where the tiredness kicked in and you make the wrong decision or you make a slack pass.

“It’s hard not to get frustrated with that and I have had a rest in the last two games which I probably needed.

31 January 2019
“But, on the opposite side, you know you may need a rest, but you don’t want to lose your place as it’s more difficult to get back in.
“Luckily, this manager doesn’t really see it like that, he picks the team that he thinks on the day is going to win the game and that makes it a little bit easier.
“At the end of the day, I have played in almost every game this season so I am hoping to keep that up.”
Friday’s opponents hold no fear for Tom, with Derby challenging for the top six. North End are ten points away from them so a win tonight would be huge.
“Derby do get a lot of media attention, I guess that’s the way it’s always going to be.
“The so-called ‘bigger’ teams are ones we usually put in good performances against so hopefully it’s the same tonight.
“They are currently going well and we are still targeting the top six.

“We need to pick up a lot of points, but to beat the teams that are already in there would give us a lot of confidence to keep going and prove to ourselves that we can get there. 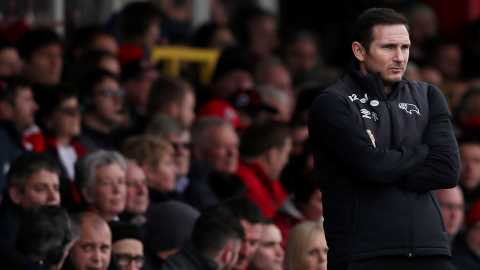 30 January 2019
“We went on a good run at one stage before Christmas but, apart from that, we have been hit and miss this season.
“It would be nice to be more solid in our performances and more consistent and try and get closer as there are still plenty of points to play for.
“While it’s mathematically still there, why not? We have shown this year and last year that we can go on really good runs of form.
“If you time it right, there is always one team who manages to sneak in and we have no pressure to get in there.
“No one is looking over their shoulder at the moment and thinking ‘Preston are on the up’, you maybe go under the radar, and it be nice to sneak up the table and catch people off guard.”
There’s loads more from Tom in Friday’s edition of The One And Only, plus we have interviews with Youl Mawene, Brian O’Neil, Jordan Storey, Connor Ripley, Brad Potts and much, much more.
The 100-page edition of the official matchday programme is still just £3 and is on sale from Friday afternoon from the club’s Sir Tom Finney Stand ticket office and from the sellers inside and outside the ground on the night, so make sure you pick up your copy.