Preston North End manager Alex Neil was delighted with his side’s performance in their 2-0 win over Cork City at Turner’s Cross. 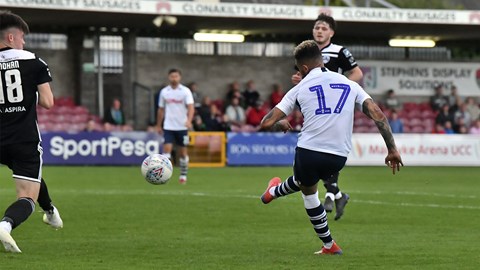 The Lilywhites triumphed thanks to a goal five minutes from the end of either half, with Jayden Stockley and Josh Ginnelly getting the goals.

And reflecting on the second pre-season game, he told iFollow PNE he felt the two XIs did different parts of the game well.

“I thought both halves we did well for different reasons. I thought in the first half we moved the ball well. We had to be patient and in the second half we created a lot of chances. There were a lot of good performances and we were unfortunate not to have scored a lot more goals.

“We hit the woodwork two or three times and the young goalie for Cork, especially in the second half, was excellent, but it was a good night for us.”

The only downside on the night was the loss of Josh Harrop mid-way through the first half with a slight injury, but the North End boss explained that his withdrawal was more of a precaution.

“He got a knock in his calf and he tried to run it off,” continued Alex. “Unfortunately for Josh it was one of those where it was stiffening up and got worse, rather than easing off and getting better, so we just took him off.

“But he will be fine in a day or so and I expect him to be fit for the weekend.

“It gave Adam O’Reilly a chance and he did well. He was energetic, got about the opposition and won the ball a few times and drove us forward and he was very unfortunate that he didn’t score with a shot just past the post, so all in all I didn’t have any complaints about any of the players.”

Stockley’s first goal of pre-season and a good display from fellow striker Moult were more pleasing aspects for the boss.

“It was a good goal from Jayden – a good finish and I though Louis Moult was excellent as well and really unfortunate not to score.

“It was nice to see Billy back as well and the goal will certainly do Josh Ginnelly good, getting his first for us, so that is pleasing.

“Billy has got a gift of making the half turn and getting on the run very quickly and he can go either way and put a cross in or open the goal up. He is a difficult one to stop and we did miss him last year and it will be good to have him back this year,” he added.