Jimmy Corcoran is excited to be heading away on a training camp with the youth team this week and hopes it will provide plenty of team bonding opportunities.

The youth team goalkeeper is one of nine second year scholars who will be part of the travelling party to Snowdonia, North Wales, along with seven first years, while a couple of schoolboys could make the trip as well.

Four days will be spent across the Welsh border before returning for a home friendly against Salford City on Saturday and Corcoran believes the players pushing each other on, in what is sure to be a tough couple of days’ training, can ensure they return in high spirits by the end of the camp.

“We’re heading off to Wales, which will be a good chance to bond more with a lot of the younger lads and that sort of thing,” the 17-year-old told the club website. “It’s going to be a tough week and it will take a lot of team bonding to get through it.

“We’ve been in for about a week now, I think the bond’s really good between the lads, we all know each other very well at this stage, even from last year. I think it’s [a chance to] become more of a team and to become more together, so I’m looking forward to it.”

The ‘keeper has been kept busy over the summer break through several international call-ups with the Republic of Ireland’s youth sides, but Corcoran has been grateful for being kept well occupied in a footballing sense while still having plenty of time to recuperate from his first season with PNE.

“I was away for the European Championships with the U17s for about three weeks. Then I was in training with the U21s and I had an U19 training camp as well, so I was quite busy with that to be fair, the international stuff. 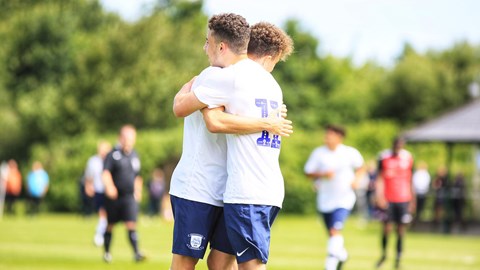 “I still got a nice break at home, I got to see all my family and just switch off for a little while and just recharge, which was good.”

The youth team were back in action on Saturday, beating Morecambe 5-1 in their first summer friendly, that a satisfying end to a first week back training for the U18 squad.

Corcoran was among the 22 players to receive 45 minutes’ game time each, recording a clean sheet as he kept goal during the first half.

“It was a good week – a tough week to be honest, in a physical sense and that kind of thing,” the shot-stopper continued. “A lot of the lads have racked up a lot of miles as well in their legs and it was good to get 45 minutes in the game, too.

“It’s exciting to be back. When you’re away from it for that long, after about a week or two, you’re mad to get back into it and the full-time training.

“It was good to get the 45 minutes and hopefully I’ll get another 45 minutes against Salford. It’s the first game of the league season a couple of weeks after that as well so we’re looking forward to that.”