Alex Neil was satisfied by aspects of his North End side’s performance in the 1-1 draw against Accrington Stanley at the the Lancashire FA County Ground at Leyland.

A headed goal from either side inside the final moments of the second half, Patrick Bauer nodding in before his effort was cancelled out by Colby Bishop’s reply. 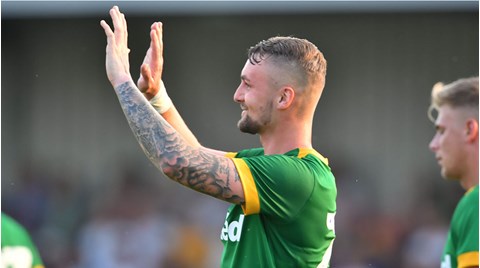 However, after the Lilywhites lost their unbeaten pre-season record on Saturday with defeat to Southampton, the manager was pleased to move on from that contest by facing a difficult test from Accrington Stanley.

“I think the disappointment for Saturday, we had to get that out of our system. We were frustrated and disappointed with how we performed, albeit against a very good Southampton team.

“We had good opportunities but we needed to take them. I just said to the players at half-time that it was a bit frustrating that we weren’t leading because I thought certainly first half we were excellent.

“I thought first half we probably should have been maybe two or three goals up, really disappointed to concede the goal in the manner we did and the timing as well.

“And then I thought second half obviously shooting up the hill, we tried to play probably a bit too much in our own half to start with, but I thought it was a game that as it wore on, we got better.

“We’re going to come up against that, sitting in and we need to find that solution, so it was a good workout for us.”

The boss was also pleased with how Patrick Bauer performed on the night, his first half header breaking the deadlock for the Lilywhites.

“I think Pat [Bauer] probably won four headers in our box that cleared the lines and then won three or four in their box, so he was a real threat for us. I think that will be a big plus point for us going forward this season.

“He probably didn’t start the second half very well, he was a little bit slack with some of his passing, but then he settled back into the rhythm again and tidied his work up, which was better.”

Alex also provided an update on Billy Bodin and the rest of his squad, the former having been taken off as a precaution soon after his arrival as a substitute.

“I think the most important thing [in pre-season] is just avoiding injuries. I took Billy Bodin off because he just hyper extended his knee, which he hurt last season, but he’s fine.

“What I didn’t want to do is take any risks for ten minutes because he’s going to get some minutes at the weekend. I think so far we’ve been in good shape in terms of limited injuries, Jayden Stockley should be fine for Friday as well so I’m hopeful he should get some minutes.

“I think we’ve got a clean bill of health at the minute, which is nice, so long may that continue and hopefully we can try and come through unscathed for the season starting.”

Watch the gaffer’s full interview now by clicking on the video above.