Alex Neil felt his players could learn plenty from Southampton’s visit to Deepdale and hoped that the 3-1 defeat could inspire a change in mentality ahead of the new campaign.

Billy Bodin drew North End level following Danny Ings’ freak opener barely ten minutes in, but the Southampton striker netted a second just before the break, which was followed by a Jake Voskins third to see the Premier League side depart Deepdale with the victory. 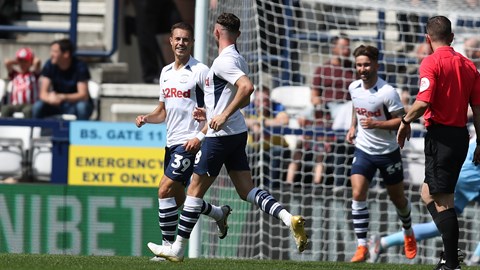 And although the PNE manager was left wanting more from his own side’s performance, he explained that the disappointing nature of the summer’s first friendly in PR1 could provide a reality check for his squad having begun the pre-season campaign against lower-quality opposition.

“I think we needed a bit of a reality check and we certainly got one today, so it’s about how we now respond to that,” Alex told iFollow PNE post-match. “I think you certainly learn more about yourself and your players [from a loss].

“They will learn a lot about themselves today as well in terms of how they felt they handled the occasion and they went about it. We’ve got a lot to work on and we need to go back and do better than what we did today.

“We didn’t start well, I thought we started really sloppily and then Billy gets us back into the game with a bit of outstanding individual quality. But throughout the match itself, we didn’t do very well enough really.

“I think mentality wise sometimes that’s a good thing, we hadn’t conceded a goal up until today and I think when you coast through the games, you get to a point where you think you’re just going to rock up and win comfortably.

“Obviously, we’ve taken a massive jump in standard in terms of what we’ve faced so far and I don’t think that helped, but I think from our perspective, we need to be far better than what we were today.”

North End have had an additional friendly added to their summer schedule – Newcastle United are set to visit Deepdale next weekend – while Accrington Stanley will now provide the opposition for Tuesday’s night friendly at the LFA County Ground, rather than Bolton Wanderers.

There will also be a friendly sandwiched in between on Friday night away to Fleetwood Town and the manager is looking forward to increasing his players’ workload further during those contests, in preparation for the first Championship game away to Millwall in two weeks’ time.

“I think we need minutes, minutes are the key and obviously the programme has been difficult to organise this year because a lot of Premier League teams have gone abroad, so the standard of the opposition we’ve faced until this point hasn’t been of the level which has really tested us.

“I think Accrington are a tough team to play against, Fleetwood certainly won’t be any pushovers and obviously we’ve got Newcastle. I think we can only improve from this point, which is good, and hopefully that will set us up for the season starting.

“I spoke to Phil Parkinson [Bolton manager] and obviously he wanted to take the game, but the circumstances there mean that they can’t, and John Coleman [Accrington manager] was very accommodating in terms of taking us for that Tuesday match. That will be a very good game for us and it will be a real good test, so hopefully we can go and try to perform.”

Watch more from the boss on iFollow PNE by clicking here.