Nick Harrison has been impressed with how his youth team players have started their pre-season campaign, making it two wins from two with a 5-3 triumph over Salford City on Saturday.

The Academy manager and his coaching staff took a group mainly comprising of the club’s scholars to Wales for a training camp during the week, only returning the day before the Salford game, in which Ethan Walker scored twice, Connor Simpson converted a penalty and new first year scholars Joe Rodwell-Grant and Ben Dooley registered themselves on the scoresheet. 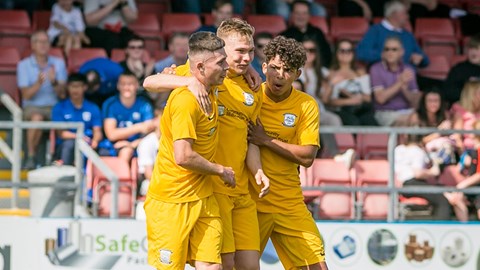 Having also seen the young Lilywhites hit five past Morecambe in last weekend’s opening pre-season victory, Harrison was pleased to see another high-scoring performance from the youth team players against Salford, a side PNE will take on in league action in less than a month’s time.

“It was a very good game with plenty of goals in it and there probably could have been some more as well,” Nick told PNE.Com. “I felt we created lots of chances and Salford did too, but I think we dominated the game and deserved to win.

“What was pleasing was the effort that all the players put in, especially after a tough week in Wales.

The youth team players spent four days at their training camp across the Welsh border, a frequent summer base for North End’s U18 squads over the last decade.

Nick explained that the time away allowed for all kinds of additional training, as well as the chance for the new first scholars and a couple of travelling schoolboys to further integrate with their new full-time team-mates.

“We’ve been going to Wales for a number of years now and first and foremost, it’s an opportunity for all the players and staff to spend some time together.

“We go through a lot of stuff in terms of what goes on in the classroom, show lots of videos and talk to the players about our expectations. But the main focus is on football and fitness and we had lots of sessions with the players, fitness sessions, weight sessions and obviously also football sessions.

“Players really stepped up in terms of their fitness, we went on some runs and did a lot of sprint work. Football’s massive on data now and the GPS and that sort of thing, so we get lots of results from it.

“We could also see the results from that in the game on Saturday and the players got through the game really well.

“What we expect and what we want to do now is step that up next week and start to give the players more and more minutes and hopefully getting up to that 90 minutes as quickly as possible.”

Having deployed two different teams in each half of the two friendlies thus far, two games in as many days in the upcoming midweek period is likely to see the youth team players staying on the pitch for longer than a 45-minute period.

A number of scholars are likely to be involved in Tuesday night’s PNE XI fixture away to Longridge Town (7.30pm kick-off), which will be followed by the visit of Grimsby Town to UCLan Sports Arena at 12 noon on Wednesday.

“We’re looking forward to another good week,” Nick added. “It’s an opportunity for us to start stepping up the players’ minutes because ultimately, that’s what they want to do – play in games.

“We’ve got a really tough challenge against a men’s team in Longridge Town on Tuesday and the day afterwards we have a game against Grimsby Town.

“We’ve got lots of players available, lots of schoolboys who will feature in the game on Wednesday and that gives us the opportunity to look at them as well.”