Alex Neil is looking for his Preston North End side to continue working on their game despite having ended their pre-season campaign on a high with a 2-1 win over Premier League side Newcastle United. 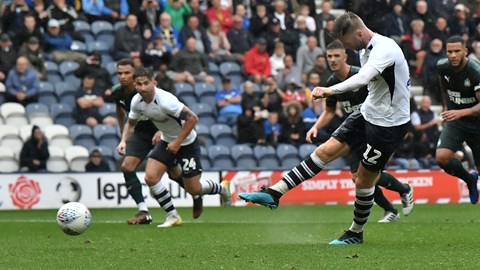 Jonjo Shelvey’s first half free-kick gave Steve Bruce’s outfit a half time advantage, but two successful Paul Gallagher penalties in front of the Allan Kelly Town End turned the tie, with another spot kick having been saved at the other end; Declan Rudd denying Miguel Almiron from 12 yards.

Although the North End manager was pleased with his aspects of his team’s display against the Magpies, he explained his wish for his team to add some cutting edge to their play in the final third.

“I thought it was a difficult game, Newcastle are a good side, but its always nice to end on a win and I thought the lads dug in,” the Lilywhites boss told iFollow PNE post-match. “I was fearing the worst when we got a penalty against us obviously right at the start of the second half, but Declan saved it.

“From that point onwards, I thought we were hard to break down, hard to beat. I still think we need to do a bit of work on our forward play. We relied on two penalties today but I think we still need to try and be a bit more creative and move the ball a bit slicker.

“It’s just looking after the ball; making it stick at the top end of the pitch, getting into good areas more often than we are at the moment and still keeping that defensive solidity, because I thought in the main, I thought the back four were excellent today.

“I thought in the middle of the pitch we moved the ball well at times, and at the top end, we created some chances but not really as much as we would like, so that’s certainly a bit of food for thought.

“The last two games that these lads in particular have played is [against] Premier League opposition. We’ve come out today having won the match which is always pleasing.”

All of North End’s starting XI against Newcastle completed the full 90 minutes and the manager noted that that was a deliberate move to continue building up fitness, which he hopes will benefit the players in their preparations for next weekend’s opening Championship game away to Millwall.

“That’s why I left them all on the pitch today. I could’ve freshened it up a bit, but it’s important that they get that 90 minutes under their belt and dig in when they need to dig in and put their bodies through the ringer.

“They will have a day off tomorrow and we’ve got a whole clean week now to do a bit of work on certain aspects we need to try to improve on and that will set us up for next week.

“Everybody wants to get to the real stuff, points are at stake and that’s when everything’s on edge and everybody’s raring to go.

“We’re ready to go, obviously we want to try and do a bit of work between now and then, try to strengthen the squad to help us, and I’m very hopeful we’ll get a few things across the line.”