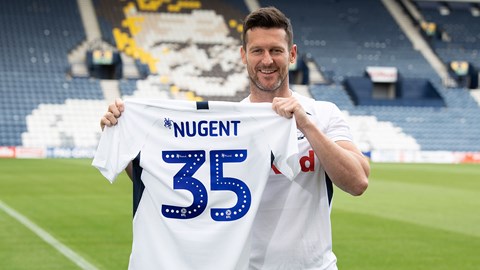 After two top six finishes in the Championship, before losing out on a Play-Off place on the final day in 2007, the former England striker made a big money move to the Premier League.

But now back at Deepdale after 12 years away, he wants to get over the line and take the club to the top flight.

“I’m delighted to be back,” he told iFollow PNE after completing the formalities of the paperwork, which will come into effect from 1st August.

“It’s been a long time since I left the club, we came so close to getting promoted twice and hopefully I can come back and it can be third time lucky and try and get this club to the Premier League.

“I left on good terms, it was the best deal for myself and the club at the time. If we had got promoted whilst I was there the first time, I can honestly say, I would still be here now.

“I’m buzzing to be back, I had a great connection with the people at the club. I just hope and I can fulfil my promises and go one better.”

He initial move took the forward to then top flight Portsmouth, before spells that included a fantastic time with Leicester City and he feels his career to this point is exactly as he hoped, but wants to achieve more now back in PR1.

“I needed to further my career [when he left the first time]. I was at the point where I had just made my England debut and I needed to be playing in the top division.

“Portsmouth gave me that chance and it probably didn’t go to plan, but you learn from your mistakes. You’ve got to get back up on your feet and try harder. I left Portsmouth to go to Leicester and got promoted there and probably had my best days as a player there, so I’m delighted with how my career has gone.

“I might be 34, but I still have plenty of running in my legs. I might have to prove that on the pitch if selected by the manager. I have not just come here to take anyone’s place in the team, I have come to be part of a team and help the lads achieve what they want to achieve.

“It’s a young bunch who are hungry to get to the premier league. Hopefully the likes of Gally [Paul Gallagher], myself some of the older pros, can help the young lads through it.”

There have been very few seasons in ‘Nuge’s’ career that haven’t ended with a promotion or an extended season via a Play-Off campaign and he is hoping for more of the same in 2019/20.

“Since I joined Leicester, I don’t think I’ve not been involved in a promotion or Play-Off campaign.

“Rather than at the end of a few seasons ago, where we just missed out, finishing seventh. We know with the squad that we’ve got we’ve got every chance of challenging in this league and hopefully we can do it this year.”

Having picked up an injury in the Play-Offs with Derby back in May, he has been working hard this summer to be fit and ready and he is looking forward to getting fully fit and getting into the dressing room where there are a few familiar faces.

“I’ve been working hard all summer,” he continued. “I’ve come back early from my holiday to try and get fit because I needed to get a club, North End have given me that chance.

“I am delighted to be here. I spoke to the physio, he thinks I’m a few weeks behind, but the hard work has started and I’m looking forward to it.

“I know a lot of them from playing against them week in, week out over the season. I’m sure I can go into the changing room, get to know the lads really quickly and try and bed myself into the team and help the lads progress.”

And he admits that he and his family are looking forward to coming ‘home’: “It’s only half an hour from where I grew up. I’m really looking forward to it, there’s a real buzz about me and hopefully I can repay the manager and owner for taking me into PNE and doing well again

“[My family] can’t wait! They have travelled all over the country to watch me every game.

“It is half an hour down the road for my mum, so she will be buzzing to not have to put the miles on the car. We’re all looking forward to it, my family is buzzing, I’m buzzing, I’m just ready to go,” he added excitedly.