After signing a new three-year contract with Preston North End, forward Tom Barkhuizen praised the role of manager Alex Neil in his decision to commit his future to Deepdale. 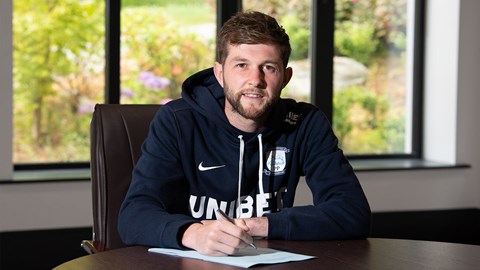 The 26-year-old put pen to paper on the terms that will keep him at the club until at least the summer of 2022 and he said that the gaffer’s decision to agree a new contract earlier in the year was a huge part in his signing.

“I spoke at length to my agent, my girlfriend and my family and you can’t put a price on a manager who trusts you,” explained Tom. “We have a really good relationship and when he signed his new contract a few months ago it partly made up my mind that I really wanted to stay.

“I enjoy working for him; I enjoy being part of this dressing room. I have been here for a few years, we all get along really well and things like that you can’t put a price on, it is just a really good place to be around and that’s while I’ll be here for another three years.

“It is the trust that gets the best out of me, knowing that he has 100 per cent faith in what I do. We speak and I know my role down to a tee.

“From the outside I might not look like the most pleasing role; I am not going to be someone like Callum, who drops in and take people on, but my part in the team is just as big a part and the fact that the manager addresses that quite a lot and backs me all the time, it does mean a lot and makes me want to go out onto the pitch and give everything for him.”

Getting the paperwork sorted early in pre-season was another important thing for ‘Barky’: “It is nice to get it out of the way. I spoke to the manager at the end of the season and said I wanted to know what I was doing before I got back and thankfully it has all been done relatively quickly and we can move on. It is a big weight off my shoulders and I can just concentrate on playing.

“We are footballers, but we have lives off the pitch and you want to be settled in your family lives as well and for me that was a big part of my decision – what do I want to do? I am at an age where it was a massive decision.

“I am 26 and in the end, it came down to how happy am I at the club and I have made it relatively well known that I wanted to be here and I am pleased to have got it over the line.”

Having missed the latter end of last season, he is back fit and he feels his own position in the squad was made more evident by his time out of the side.

“I said a few months before I got injured, when I got a bit of criticism, that you get a luxury of being injured, because if the team doesn’t do as well, then people realise just exactly what you do, especially when you are not someone who gets on the ball all the time.

“They then see the different aspects of the game you bring to the team.

“I know we ended poorly last season, but it probably opened a few eyes, even to myself, to realise that I am an important player to the team.

“It makes you feel pretty good – obviously you want your team-mates to win, but from a personal point of view it did help me a little bit. The most important thing to me is that the manager trusts me and he wants to play me and he is the man who makes the decisions,” he added.

There is a lot more from Tom, with an extended interview from the club’s Cork training base available by clicking on the video at the top of the page, available free for all.