The countdown is on to the new EFL Championship and Preston North End forward Tom Barkhuizen is hoping for a big following from the off to help spur on the team this season. 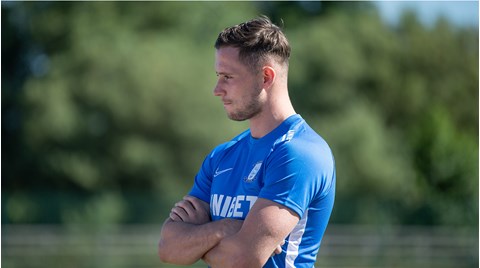 The No.29 will be looking for his first competitive action since March, after an injury ended his 2018/19 season early, but is looking forward to the trip to Millwall and having an away end in full voice.

“For a club like ours, the fans are very important,” he told iFollow PNE at Deepdale. “We need them to keep coming and watching us, week in, week out. Our away following is one of the best in the league. It would be nice if we could get that at home, get a few more people in and get the atmosphere going early on, but only our performances on the pitch will do that.

“If we win the first game, hopefully a few more will turn up to the Wigan game and the one after that and then we can keep going. It would be nice to get Deepdale full and hopefully we can put on a good show.”

The former Morecambe man, who signed a new three-year contract in the summer, is enjoying the competitive edge in training this week and the battle for a starting berth at The Den on Saturday afternoon.

“I am looking forward to this week in general; getting prepared for the season,” he continued. “We don’t know who is going to play and we are all fighting to be in the starting XI, so it should be a good week and we are raring to go.

“It is a nice situation to have. With the injuries we have had over the last couple of years, it has been rare that we have had a full squad, but thankfully we are going into the new season with that.

“There will be plenty of competition; we have good competition all over the pitch and we have to work hard to get into the starting XI.”

After an opening day with over QPR last August, the opening two months of the season proved difficult for the Lilywhites and the 26-year-old is keen for that not to be repeated this year.

“It was a bit difficult at the start to get straight back in and be playing games, but as time has gone on, I have been a little bit better and a little bit sharper and I am ready to go.

“Last year is gone now. It was a good performance down there [last season], but we have to go and do it again. We want to start off with a win and get going nicely.

“Everyone wants to get off to a good start. It is really important, in my eyes, that you do. Last year we got off to the worst start possible, so it would be nice to go down there and try and get started with a win.

“Last year we put ourselves in a really difficult position. Even if we had picked up two more wins out of the first ten, we would have been right in the thick of it. I know we tailed off towards the end of the season, but if we had been right in that push, at that time, we probably would have kicked on again.

“It really held us back; it is massively disappointing when you season is effectively over after ten games. The good thing is that we have enough characters in the dressing room and we went on another unbeaten run – we did it twice, which is good – and we showed we have that character that if we do take a couple of knocks, we will come back stronger.

“We are going to get that during the season, no one is going to go unbeaten for the whole season, it is about how you bounce back and hopefully we don’t have to do that after the first game.

“It is well known [in the dressing room], we had five points from the first ten games and it was embarrassing to look at the table and see how badly we were doing. I am not sure out performances reflected that, but that’s how football goes. You can’t get everything you want and sometimes you play well and lose.

“We have had plenty of games where we have been really bad and got the three points, so it is just about going into the season, hopefully keeping everyone fit, and trying to get three points,” added Tom.