Preston North End forward Tom Barkhuizen has put pen to paper on a new deal with the club. 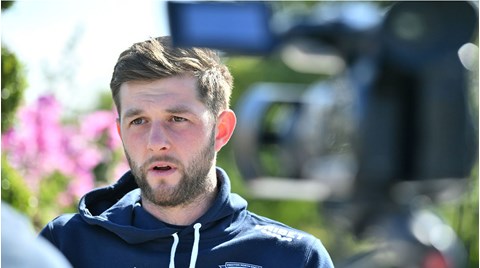 The 26-year-old has signed a three-year contract, taking him until at least the summer of 2022.

Having joined the club in January 2017 from Morecambe, ‘Barky’ has gone on to be an integral part of the squad at Deepdale, going on to make over 100 appearances, scoring 21 goals in the process.

He signed for the Lilywhites from Morecambe and has been a vital to the team with his work-rate, pace and productivity in the final third.

Speaking after signing the contract Tom said: “You can’t put a price on a manager who trusts you. We have a really good relationship and when he signed his new contract a few months ago it partly made up my mind that I really wanted to stay.

“I enjoy working for him; I enjoy being part of this dressing room. I have been here for a few years, we all get along really well and things like that you can’t put a price on, it is just a really good place to be around and that’s while I’ll be here for another three years.

“It is the trust that gets the best out of me, knowing that he has 100 per cent faith in what I do. From the outside I might not look like the most pleasing role; but the fact that the manager backs me, it does mean a lot and makes me want to go out onto the pitch and give everything for him.”

Manager Alex Neil was delighted at his player’s commitment to the club: “The two years I have been here, Tom has been an important part of the team. In the first season he played more games than anybody else and he is affective for us. He gives us that running power and he very rarely misses games. His deal is reflected in his importance to the team.

“He I very good tactically. All the information I give him, he carries it out very well and his running power – particularly with the likes of Gally [Paul Gallagher] and Pearo’s [Ben Pearson] putting the balls in behind, it really stretched defences for us and he chips in with a few goals as well.