Preston North End’s first signing of the summer is looking forward to writing a new story with the Lilywhites after four years with Charlton Athletic. 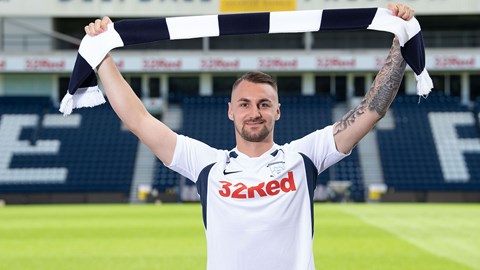 The 26-year-old centre half has agreed a three-year deal at Deepdale, beginning on 1st July, and he spoke to iFollow PNE after putting pen to paper on his contract.

The German defender, who scored his former club’s winner at Wembley in the League One Play-Off Final last month, was delighted to end his time at The Valley in positive fashion, but is now ready for the next step.

“I am really excited to be here now,” he said. “I am happy to play finally in the Championship again and I am really delighted. I can’t wait to meet all my new team-mates, all the staff and management and get started.

“I was four years at Charlton, we had some disappointing moments, but also highs, like the promotion this season. I spent a good time there, but it was time for me to start a new chapter in my career and I am really excited to be here now.

“We got promoted in the Play-Off Final and I scored in extra time, which got us promoted, which was a very special moment and I am happy that I could finish that chapter with a successful moment.”

Having met with manager Alex Neil, Patrick shares his new boss’s ambitions and is ready to join the battle for places: “I saw last season the team played a very good year,” he continued. “They are very good players and there will be good competition for places. Everyone wants to be in the starting XI and I am looking forward to it.

“I have spoken with the manager and he gave me a very good feeling. He spoke about the ambition of the club and how ambitious they are for the next couple of years and I really could identify myself with the team and the club.

“He wants me to be a leader when I am on the pitch, he wants my mentality to be that I show I am strong in the air and that is what he is expecting of me.”

Having started his career in his homeland, he spent four years in Portugal before the last four years in England and he feels these experiences have played a big role in shaping him as a player.

“I have really loved it [in England]. Before, I was playing in Germany and Portugal, but from the first moment I came here, I just saw my future in England. I have thoroughly enjoyed it and I am delighted to be here.

“They are different cultures in Germany and Portugal and from every country I took my experiences – in Portugal it was more technical; in England it is tough and harder football and in Germany as well.

“I collected my experiences and now at 26 I can’t wait to prove myself again in the Championship this season.”