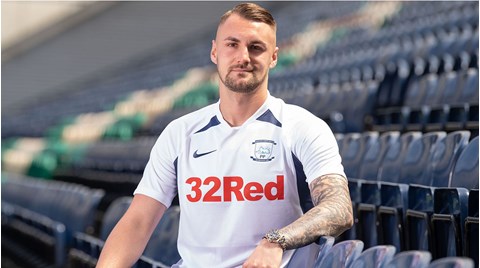 The 26-year-old centre half has agreed a three-year deal at Deepdale from 1st July after turning down a new deal at Charlton Athletic.

The former German youth international, who played for his national side up to the U20 age group, scored the winning goal in injury-time in the League One Play-Off Final for Addicks, as Lee Bowyer’s side earned promotion back to the Championship against Sunderland at Wembley.

This proved to be the last of the Backnang-born player’s 135 appearances for Charlton, since he signed for the club in June 2015. Prior to that, he started his career in his native Germany with Stuttgart, before spending three years in the Portuguese top flight with Maritimo.

Speaking after completing the formalities of the agreement Patrick said: “I am really excited to be here. I am happy to play finally in the Championship again and I am really delighted. I can’t wait to meet all my new team-mates, all the staff and management and get started.

“I was four years at Charlton, we had some disappointing moments, but also highs, like the promotion this season. I spent a good time there, but it was time for me to start a new chapter in my career and I am really excited to be here now.”

Manager Alex Neil stated at the beginning of the summer his intent to add some more experience to the squad and feels that his first summer recruit will add vital competition in the group.

He added: “Patrick is a strong and powerful defender who we have monitored closely. He has experience of playing at the top level in Portugal and adapted very well to English football in the past few years and he will add more competition to our defence in the central positions.”