Three of the ten goals on the League Football Education’s [LFE] Goal of the Season shortlist come from Preston North End players.

Having won the LFE Goal of the Month award for January and April during the 2018/19 season, Adam O’Reilly has had those two winning strikes nominated for the award, while his midfield companion Jack Baxter has also had an effort put forward for the prize.

O’Reilly’s first monthly winner came away at Carlisle United back in January, curling a wonderful shot into the top corner from outside the box, capping off an eye-catching passing move.

The two other North End goals on the ten-strong selection came within the same game, as the Lilywhites met Wigan Athletic in the Lancashire FA Professional Youth Cup. 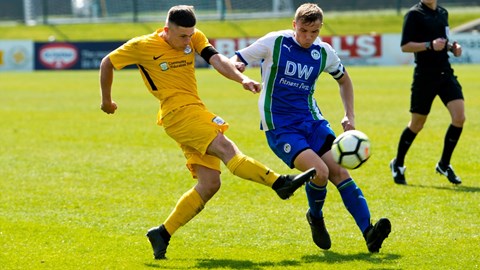 Second Goal Of The Month Award For O’Reilly

Irishman O’Reilly was on target in style once more in that game, latching onto the ball deep in the opposition half before driving forward and hammering a long-range shot into the top corner.

His midfield team-mate Baxter also caught the eye with a sensational strike from that match, hitting a pinpoint free-kick from inside his own half over the opposition goalkeeper and into the net, that winning a post-season Twitter poll to become the tenth goal on the shortlist.

All three efforts are now among a set of ten goals from across the Academy leagues from the 2018/19 campaign which are in contention to be crowned as the LFE’s Goal of the Season.

You can vote on Twitter using the designated hashtag for each goal. Use #LFEGOALF for Adam’s effort against Carlisle United or #LFEGOALI for his strike against Wigan Athletic, while it’s #LFEGOALJ for Jack’s goal against the same opposition.

Votes can also be cast on the LFE’s website poll here by selecting your favourite strike – make sure you do so before voting closes at 12 noon Monday July 1st!