The youth team were punished for failing to capitalise fully on their dominance against Walsall, the visitors scoring a 91st-minute equaliser to force a 1-1 draw at UCLan Sports Arena.

Ethan Walker had edged PNE ahead eleven minutes from time with an eye-catching strike, that a reward for the hosts’ patience going forwards, but the Saddlers broke in stoppage time as Sam Perry converted a low cross to snatch his side a point.

The 16-year-old has now scored 2️⃣0️⃣ goals for #PNEU18 since the start of last season. 💫👏#pnefc pic.twitter.com/2iBGdGXpLq

Lewis Coulton returned from youth international duties with Scotland while Jimmy Corcoran was back between the sticks in the only changes from the previous game against Carlisle, although there was a switch of surface; heavy rainfall making the grass unplayable and the 4G turf was required.

Contrary to the pattern of play which would follow, it was the Saddlers who made much the better start, Jayden Campbell a real nuisance down the right side, drifting into the centre with one early run as Perry took it off his toes and drilled a first time shot just wide.

Campbell weaved into the box seconds later but was this time stopped in his tracks by Lewis Simmons, with defender Callum Nimmo placing wide Kian Flanagan’s corner in the following minute.

Alex McSkeane then drew a low stop from Jimmy Corcoran but the Lilywhites regrouped to take a foothold in the contest, Joe Nolan chipping a ball over the defence for Walker to chase, but he couldn’t bring it down in time to test opposition ‘keeper Ethan Dawe.

The Lilywhites went close several times midway through the half, Josh Pollard sweeping a first time shot wide, Darren Brannigan having a header cleared off the line and Walker being denied by a fine one-on-one save from Dawe, all that within the space of two minutes. 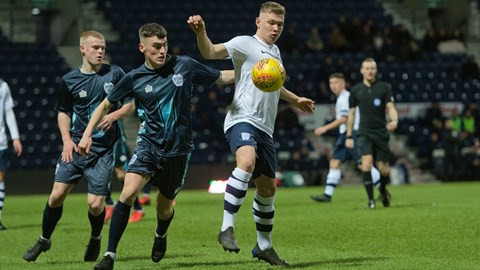 Every Game Provides A Lesson For Walker

McSkeane fired over at the other end, before PNE created another flurry of chances, Tyrhys Dolan leading an attack into the box with his shot blocked, Brannigan’s follow-up brilliantly tipped away by Dawe and the Walsall ‘keeper then held onto Jerome Jolly’s strike.

Pollard volleyed over a Lewis Coulton cross before the interval and despite the wealth of chances created in the first half, the Lilywhites were even more dominant in the second.

Dolan almost opened the scoring in unbelievable fashion six minutes after the restart, skipping and pirouetting away from his opponents with captivating grace, only to place wide of the bottom corner from ten yards.

Lewis Earl’s header wide from a corner preceded a pair of North End handball appeals being dismissed, McSkeane drilling well over in the intermitting period.

The Lilywhites continued to control the play, Walker skimming the crossbar from 20 yards before substitute Joe Rodwell-Grant met Pollard’s flick by nodding wide with his first touch.

Simmons’ 20-yard drive forced Dawe to save again but PNE did manage to break the deadlock in the 79th minute.

They were rewarded for maintaining their pressure as Walker received it on the edge of the box, dinked past his man and curled into the left corner of the net.

It looked like the hosts would hold on, as Earl’s header was blocked and Walker struck into the ground and wide, but Walsall pulled level in the first minute of added time.

They intercepted on the halfway and played it down their right, a low cross coming in to find Perry at the back post to tap in and steal a point.

Academy manager Nick Harrison felt his side were unfortunate not to take all three points given their level of performance but said lessons must also be learned with regards to game management.

“I actually thought we performed really well today; we passed the ball better than we have for a long time, created numerous chances and really should have won the game comfortably,” he told PNE.Com. “I think that’s what can always happen when you’re winning 1-0, you’re just one mistake away from drawing the game and that’s what happened.

“I thought it was a great goal from Ethan [Walker], really individual play and that’s what he’s capable of, he just needs to do more of that.

“It’s all about game management – when and when not to take those risks. At 1-0 with a few minutes left, we didn’t need to take the risks which we did and then when we’ve lost the ball, the defending’s got to be a little bit better.

“It’s really unfortunate because the boys had performed well enough to win the game, but it’s got to be a lesson for them to understand that when you are winning 1-0 with a couple of minutes to go you can’t afford to make silly mistakes.”

Blackpool are next up for Harrison’s youngsters, a 10.30am kick-off at UCLan Sports Arena on Saturday, and the Academy manager will be looking for a similar performance.

“There are lots of positives we can take from this going into that game but if we’re being critical, we want the players to be more clinical in front of goal and we want to keep clean sheets. I think if we can do that and perform the way we did, then we will be happy come Saturday’s game.”