The PNE boss was very complimentary of the Boro boss when he spoke to iFollow PNE to look forward to the game at the Riverside Stadium.

“It is going to be a tough match,” said the gaffer. “They have got to a place where their Play-Off spot is relatively comfortable – albeit if we do win the game we take it to just four points between us and them.

“It is going to be a huge game for both teams. Their disappointment from losing their last match against Brentford will mean they certainly want to win this one to make things right.

“They are a good team; a strong team. They have invested a lot of money putting this team together. Tony [Pulis] has got them into the Play-Off positions and defensively they are very solid, very well organised and it is going to be difficult for us to go and beat them.

“Tony is a very tactical manager. You can see how he sets his teams up and why he does it. Even his changes within games, you can see the thinking behind it, so he is very much a thinking man’s manager. He looks at the game in a certain way and makes adjustments accordingly.

“We will need to be prepared for that, as we always are, and then it is just a case of hoping that the lads on the pitch perform as well as they can on the day – which is always going to be the deciding factor in any game.”

Boro have the best defensive record in the division and have only conceded ten goals from open play all season and Alex said that his team must strike a balance of attack and defence in order to try and get the better of the north east side.

“The difficulty you have got it, do you over expose yourself to try and break them down and leave yourself vulnerable or do you hopefully try and probe, but probe enough to make sure that you get the goal that decides the game,” he continued.

“It is going to be a tough one. I have seen Middlesbrough play in different ways this season as well. I have seen them play against people when they have been really aggressive and I have seen other games where they have scored the goal and been a bit more defensive.

“It is going to be a test where you night need to deploy different things during the game, depending on what is required.”

Another test they pose is the fact they have a very experienced line-up, packed with internationals and Premier League players, a test the manager believes is something his side will thrive on.

“They have top players right through their team. They have a lot of boys with a lot of Premier League experience, the likes of [Jon Obi] Mikel has won the Premier League and the Champions League!

“They don’t struggle for pedigree, but we are confident in what we have been doing recently; our away form has been terrific, so we went to make sure that we try and maintain this. 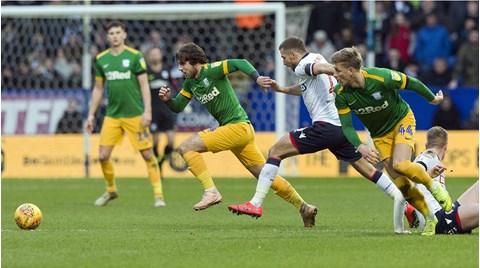 All About The Result Now For Pearo

“This is an important game for both teams, that will hopefully have a bearing on how the nine games after that will go.

“These are the type of tests our young players will thrive on. I am sure whoever plays will think this is a great opportunity to show what they can do, but you don’t become a top player for no reason. They have players with great qualities, who will want to influence the game as well.

“It will be a really exciting game. I hope we take a good number of fans up there, because our away fans have been excellent this season and hopefully we can give them another really good away day.

“It is difficult to say it is going to be an exciting game – because games against Middlesbrough have been relatively low scoring – but what is at stake makes it exciting naturally and we are really hopeful we can go up and show our best,” he added.