Preston North End manager Alex Neil says that neither he nor former team-mate Garry Monk will be expecting any surprises from this weekend’s encounter with Birmingham City.

We have got to the stage of the season where every team knows all about their opponents, plans and approach and the Blues are a side that have impressed the PNE boss in 2018/19.

“They have had a good season,” he told iFollow PNE. “They are hard to play against. The game down [at St Andrews] we found really difficult and we had quite a few bodies missing at that stage, but this is going to be a tough match.

“I went down to watch them at Bristol City last week; they won the game and deservedly so – they were excellent. The front two were a real handful. They put the ball forward quite direct in their style, but they have some really good players across the pitch and it is going to be a tough match.

“We have been in a really rich vein of form, in terms of results, and we will be looking to continue that.

“We know what is to come from them and it is just a case of how well can we play on the day? And I am sure they are saying exactly the same thing. I don’t think there are going to be any surprises for either team on Saturday in terms of shape, style or how the game is going to be played, it is just a case is who can play the best and take their opportunities.”

Alex and Garry Monk were team-mates at Barnsley and he has enjoyed facing up against him in the dug out over the past few seasons and feels he has done a great job at St Andrews.

“I played with Gaz at Barnsley,” he continued. “He is a good lad and we have had some really interesting games [as managers]. When he was at Swansea, I played against him there, the same with Leeds and Middlesbrough and now with Birmingham.

“He will be happy with what they have done this year. He has gone in and steadied the ship and made them a really good fighting force this season, so it will be a tough game for us.”

This is the third game in a week and the final one before the last international break of the season, so with that in mind, does the manager think it could be a game to freshen up his troops?

“The third game we played the last time we had three in a week – against Forest – we looked a bit flat. It was a difficult game for both teams. 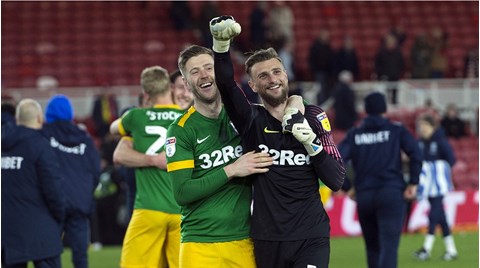 Declan Rudd Reflects On Watershed Moment Ahead Of Blues Game

“This time I don’t think either team has an advantage – whereas last time Forest had played on the Tuesday, so had an extra day’s recovery – what will happen is, we will see who is available and it will either give us the opportunity to freshen it up, or it won’t.

“What it does do, is to give other people a chance to come in. They have managed to get the results we have needed and hopefully we can try and marry that up with performances as well,” he added.