Ben Pearson is available for selection again for Wednesday night’s trip to the Riverside Stadium and he is looking for another positive result.

Speaking to iFollow PNE ahead of the side’s visit to the north east, the North End No.4, who had travelled to watch his team-mates in derby action at the weekend, said that it was now at the stage of the season where the only thing that mattered was the result.

“The last two games have given us a good points return,” he said. “I was at the game at Blackburn. I thought it was a tough game and at this stage of the season we just have to win the games, which we did, so now it is more about getting the wins than the performances.

“Two weeks down the line nobody cares how you have played. We have played well this year in a number of games, but looking back nobody is bothered now.

“It is just about getting a good points return in the next week or so. We have some tough games, but we will see where we are after that.”

The midfielder goes into the game in a confident mood and looking forward to the challenge posed by one of the division’s big-spenders and promotion favourites.

“It will be a great battle,” continued Ben. “They have got a top six team. They have got a good defensive structure and players who have been there and done in all over the pitch. It will be a tough game, but if we perform to the levels that we can do, then we can beat anyone.

“The past couple of games we have played against Middlesbrough we have played well and not got the results. I remember last season we went up there and drew the game and we will be looking to do exactly the same as we have been doing the last ten games.

“We have been on a great run and we need to carry that on if we are going to make it into the Play-Offs. 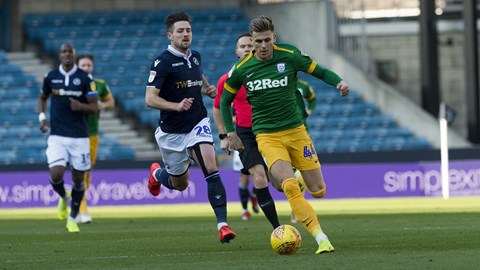 “This year there is no big hitters where you are thinking ‘we will take a draw’. We go into every game thinking we can win. There is no-one to feared this year. It has been quite even and whether you are playing Bolton or Rotherham, you expect the same as if you were playing Leeds.”

It’s now five straight away wins for the Lilywhites and Ben feels that this has helped and that with the fans’ support, he feels no reason why it can’t be six by the end of the game on Wednesday night.

“We have been better away from home this year, which has been slightly disappointing. We would probably have liked to have more of a points tally at home, but if you are winning away you can afford to slip up a little bit at home.

“We just have to continue our away form. And the fans have been great. I was there on Saturday and all 7,500 were loud and they made it worthwhile, so they just have to keep doing what they are doing as well,” added the 24-year-old.