Darren Brannigan is aiming to become the youth team’s top scorer by the end of the season.

The Liverpool-born striker extended his tally for the campaign to nine with a brace in the emphatic 4-1 away win against Rochdale, having also found the net in the previous weekend’s victory over Fleetwood Town. 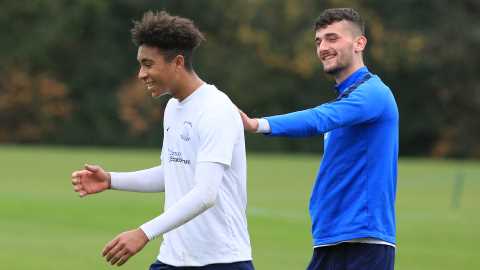 He now sits only a goal behind Ethan Walker, who leads the young Lilywhites’ goal charts with ten to his name, with Brannigan admitting that he is looking to overtake his team-mate’s current haul in the final months of the campaign.

“It’s [the feeling] good, especially being back in the starting eleven and scoring goals when I play,” Darren told the club website following the Rochdale success. “I’m going for top goal scorer and I’m one off [Ethan] now.

“Hopefully in each game I can try to score and maybe get a few. But if I’m not scoring, I need to be creating chances because if I’m not scoring goals, it’s asking what more I can do [for the team], because that’s how you keep the shirt.

“I just have to keep going, take each game as it comes and then hopefully try to get on the scoresheet. Hopefully I can end us as our top goal scorer at the end of the season; that’s the goal.”

Five of Darren’s goals have come since the turn of the year, his latest two important in the triumph over Rochdale; the first especially with it cancelling out the host’s early opener and allowing North End to go and turn the scoreline around.

“It was the starter to get us going in the game really,” he continued, speaking of his effort to make it 1-1. “We started well and needed a goal to get us going because you can’t just play well, you need goals with that to win the game. That got us back in the game and we just went on from there really.

“I had a few chances where I could’ve scored which I need to be more clinical with, but with the easier chances I was just there to put the ball away and help us succeed in the game.

“You’ve just got to keep going if you don’t score the chances that you get – you’ve then got to score the next one and if you don’t, you just have to keep going. You can’t let your head drop because that has an effect on your performance, but I didn’t let that happen.

“Last year [away at Rochdale] we went in 2-0 at half-time and then went on to lose the game. We didn’t want that to happen again, so we worked hard to press well.

“I’m feeling confident when I’m playing; before the game, I felt like I was going to score. It’s about keeping that run going and keeping the goals going.”