Callum Robinson was doubly delighted to mark his return for Preston North End with a victory, having come off the bench before Sean Maguire scored a stoppage-time winner against Birmingham City at Deepdale. 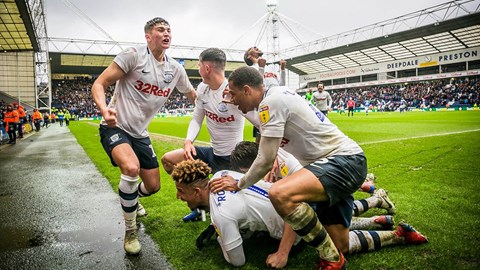 After a four-month absence, North End’s No.7 was making his first appearance since November and was pleased enough just to be back on the pitch as he replaced Brad Potts on the hour mark.

But as Maguire headed in the decisive goal in the 94th-minute to hand Alex Neil’s men all three points, Robinson’s delight was multiplied even further as he admitted the late goal truly topped off his return, with PNE now only sitting outside the top six on goal difference.

“The lads have done great, they’ve had a great week but then it’s been a great twelve games now,” Callum told iFollow PNE post-match.

“All the lads are buzzing and the staff. It was a horrible game, I would say, from start to finish, it wasn’t a nice game and the weather didn’t help either. But similarly to Wednesday [against Middlesbrough], we stuck together after we went in 1-0 down, got the result and then we’ve got another result today where it looked like it was going to be a draw.

“If we can start dreaming, then these are the games where we get a result which we probably would’ve just took the draw in the end but Seani’s popped up at the end and got the winner and give us three points instead of one.”

It has been a long road back for Robinson, this the first serious injury of his career thus far, the forward now just relieved to be back as he credited his team-mates for their sensational run of form, which has seen eights win from a twelve-game unbeaten run over the last two months.

“I’ve never been injured before so it was all new to me, especially then having an operation and stuff, it was a long period out.

“I’ve come through it now and mentally, you’ve had them horrible times in the gym and the physios know how hard it is for us to get back on the pitch.

“You have that positive belief around the training ground as well so it’s really good and I’m really happy for the lads as well because I haven’t been involved obviously over the last three or four months. It’s a credit to all the boys and the staff, they’ve got us in this position now and I’m grateful to be back involved with the boys.

“I’m really happy and the grin won’t be coming off my face, especially for a few weeks!”

The international break will now provide Robinson and his team-mates with time to recuperate ahead of a huge final eight games of the season.

“In my head as well personally, I was thinking ‘If I can get through this 20 or 30 minutes’ I knew that I’ve got two weeks now to get sharp on the training pitch and be even more ready for the Reading game coming up.

“[We’ve got] Gally [Paul Gallagher], [Alan] Browney and [Louis] Moulty, who didn’t get on today, but we’ve got an extra two weeks now to really get ready for this run in of games.

“We’ve got some real tough games as everyone knows in the club, but if we do well in them, we will deserve to have a spot in there [the Play-Off places].”