Birmingham City manager Garry Monk says his side will be looking to end the Lilywhites’ long unbeaten run at the weekend, just as they did in the first half of the season.

Speaking to the Blues’ official website – www.bcfc.com - ahead of the Deepdale clash, the former team-mate of Alex Neil acknowledged they were up against an in-form team, but they would not be settling for anything other than three points.

“We are in a three-game period right now where we have not got the results we want,” he said. “We want to address that as soon as possible. We get an opportunity to do that in this next game, yes, it’s against an opponent who are in really good form.

“I think the first time we played them they were nine games unbeaten and we managed to get the three points. Now it’s 11 games, it’s an opportunity to try and see if we can do the same.

“We know it’s going to be difficult but we have been fighting all season, we have got a huge amount of character in that changing room. Now is the time for that to come shining through.

“Three points is our ultimate aim, a point would be another point on the board. But, of course, we got into each and every game trying to win.

“There is no other mentality to have than to try and win the game. We need put in the performance, that’s the thing that led us to getting the points that we have done so far this season. I think points is the most important bit for us this season.

“I said at the start that we need to get as many points as possible, as quickly as possible, and accumulate them at a good pace. I think we’ve done that more often than not up to this point – people can judge on whatever they want, but three games is inevitable unfortunately in this league.

“Every team in this league has gone through that. We want to stop that straightaway and get three points.”

With just one clean sheet in their last 13 games the Blues boss is also looking for a balance of defence and attacking instincts in PR1 on Saturday afternoon.

“I love clean sheets, I love to score goals too, but you have to get the balance of both right, in these last three games especially.

“I think some of them have been a bit unfortunate. The Villa game for instance, it was very marginal. There wasn’t a lot of chances for them, I think there were only three chances that they had and they managed to score with one of them. And with the four chances we had, we didn’t manage to take one.

“The game on Wednesday, the goals we conceded we cannot be happy with, and there’s no getting away from that. We need to get our defending right. 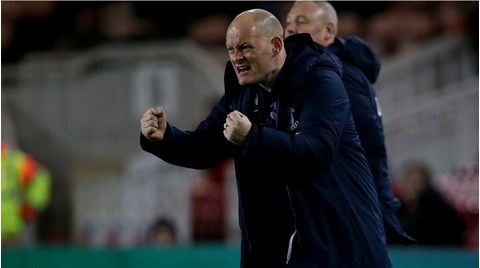 Alex Neil Not Expecting Any Surprises

“I think they’ve shown already what we’re capable of when we get it right, our defending. And we know as a team, when we get that part of it right, we’re always a team that are going to create chances in a game.

“We normally create good chances, whether it’s one chance, two chances or ten chances, they’re normally good chances for us when we do create them. We have to get both sides of the game right and get back to that – more resilience, that mentality to be very difficult to beat and the intensity that we play at.

“We need to get that right, which then allows us to go on and be effective when we’re attacking.

“A clean sheet would be welcome, but we’re facing a team that’s in really good form and it will be difficult. It’s like in any Championship game, it’s difficult to not concede goals, but we need to try and make sure that we do that in this game at the weekend,” he added.