Youth team midfielder Joe Nolan was pleased to play his part in the young Lilywhites’ 2-0 win against Port Vale on his return to the starting line-up.

The first year scholar had started two and come off the bench in another two of the youth team’s previous four matches, with the club’s U18 side now unbeaten in their last six thanks to goals from Jerome Jolly and Tyrhys Dolan to see of Vale. 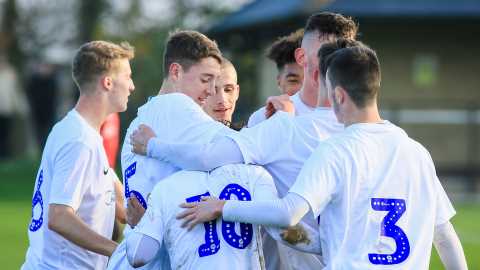 Joe, who recently turned 17, was pleased with the display as well as the result which that yielded, on both an individual and collective level.

“I thought we could’ve scored a couple more but it was good to score two goals and keep a clean sheet as well. The back four were really good and the midfield were strong; we won a lot of second balls and played forwards as much as we could.

“It was a great free-kick and then Jez [Jerome Jolly] did well to finish it [for the first goal]. Even though we created a load of chances and we could’ve been a bit more clinical, we won 2-0 and you can’t really complain with that.”

With Adam O’Reilly out on loan at Hyde United and fellow midfielders Jack Baxter, Brian McManus and Josh Pollard all missing through injury, Joe formed a part of a young midfield trio, sitting just behind U16 Ben Dooley and fellow first year scholar Tyrhys Dolan.

The 17-year-old did not believe the youth of the midfield had much impact on the game, though, and was pleased to apply some practice completed in training in the match situation.

“Ben [Dooley] and Ty [Tyrhys Dolan] played well, they did press really well from the front and I tried to organise them as much as I could in front of me and I thought I did that well because that’s something I’ve been trying to work on, too; my organisation and leadership skills.

“I’ve been working on things out of possession, trying to get my positioning in front of the back four better so I could pick up more second balls, and then being more positive in my play because instead of passing sideways or backwards, I’ve been focusing on getting the balls out wide or if it’s a diagonal ball or up to the striker.

“I thought I did well and made a mark. With other people out, I hope I’ve given Nick [Harrison] something to think about because he gave me a chance to show what I could do.”