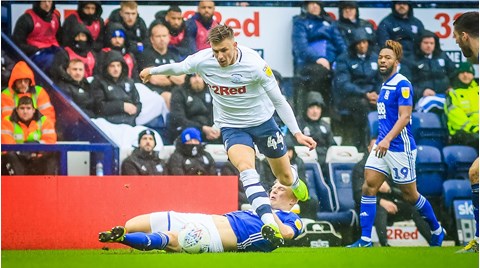 Brad Potts Only Looking At Reading

The Lilywhites go into the final five weeks of the season sat on level points with the top six, only out of the Play-Off places on goal difference and the No.12 feels that a refreshed squad can go on another good run during the remaining fixtures once again.

“I think the break has come at the right time for us,” he told iFollow PNE. “The last 12 games have been unbelievable for us, so put in a run of eight wins and four draws in this division is excellent.

“Those last 12 games were played with intensity and energy and we have now had a chance to recharge the batteries ready to go for these last eight.

“We have shown over the season that we can go on unbeaten runs. We did it once before the current one. The last time there were a few more draws in there, but this time we have managed wins, which has been important. But if you look back to where we were in October, to have this opportunity to go into the last eight games with something to play for, with the chance of getting to the Play-Offs is fantastic.

“We have come so far in such a short period of time, it has been a great thing to be a part of. To see some of the young lads come through and play with no fear, has been a joy to watch.”

And whilst it is easy to look ahead to what is to come, Gally was keen to stress the importance of taking one game at a time.

“There’s no point jumping the gun,” he continued. “There are a lot of points to be played for. Teams are battling for different things. There are those playing for survival, their future at clubs, so every game is going to be tough.

“It is down to us to approach it in the right manner, play with that freedom we have been playing with. Not arrogance, but that belief that we can win games.

“Over the last 12 games we have done that. Some of the games we have not played as well, but when you are winning games it breeds confidence and we believe in every game we can win.

“The last three games have proved that point. We have not played that fluent football we are capable of, but we have managed to come away with the points.”

After taking 7,500 to Blackburn and the next away game at West Brom already sold out, it looks like another possible sell out following at the Madejski Stadium this weekend, with only around 400 tickets remaining of the 2,000-plus allocation and Paul is grateful of the continued backing.

“We’ve always had that support. We went to Blackburn and Middlesbrough and had excellent support, but now we are getting to the business end of the season and people can see the results coming and the away form.

“We have now won six straight away games on the bounce, which is incredible – especially in the Championship – and everyone is buying into it.

“I have said it many times before, that the players and the fans are in it together and you can see it at the end of games when we all come together to show that appreciation for that support which spurs us on to do well.

“We won’t get carried away. You have to take each game as it comes. Other teams have things to play for, which makes it more difficult, but we should be enjoying this because where we have come from and where we are now is chalk and cheese,” he added.