Striker Louis Moult has been put forward by the PNE Community and Education Trust for the 2018 EFL Awards 'Player in the Community' category.

The nomination comes from Louis' fantastic work in the community last year having only signed for the club in January 2018.

From regular visits to Preston North End's holiday camps to being a guest bingo caller at PNE's Family Bingo night, North End's No. 9 has been a valued addition both on and off the pitch over the last 12 months.

A memorable year for both Louis and the Trust culminated in December where arguably his most high profile community effort took place. 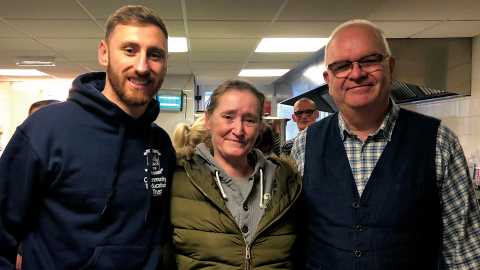 As part of the PNE Donation Campaign over the Christmas period, Louis visited one of two charities who were benefiting from the campaign, homeless charity The Foxton Centre.

Louis visited the centre and met those who'd been affected by addiction and homelessness and also provided some Christmas cheer in the form of Christmas gifts and matchday tickets for an upcoming Preston North End home game.

The frontman also put the spotlight on a national issue by speaking of his own personal experiences: “These kinds of places are close to my heart; I’ve seen people suffer with these issues."

“My mum was an alcoholic and was just 43 when she died which is such a young age and it’s a horrible thing to go through.

“That’s why I want to help people in similar situations and people that were in my situation that have been left with not knowing where they’re going to go in life. I was 15 at the time and I had a couple of dark years but always tried to stay positive and I was lucky I had people around me who helped me.

“Everything I do, I do it for my mum, my dad, my brother and now, my wife and my kids who mean so much to me and It’s made me the person I am today."

The shortlist is expected be announced next month with Moult up against various other nominated players from other EFL clubs who have also performed sterling work in their respected community.