Josh Pollard is looking to move forward from a frustrating game which saw North End’s youth team draw 1-1 against Carlisle United at the weekend. 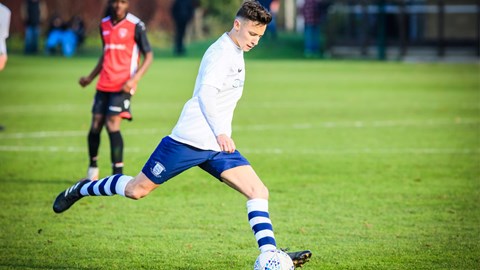 The second year scholar opened the scoring with a stunning effort from distance before the visitors restored parity with an early second half equaliser, with the contest played in blustery weather conditions.

Those conditions meant neither side could create as many chances as they might have liked, as the 18-year-old midfielder looked back on the stalemate.

“The wind didn’t help and obviously it was difficult for us to retain possession, so we went more long ball which is not like us,” Pollard told PNE.Com. “We could’ve retained possession a lot better and played through the thirds and we could’ve created a lot more chances than we did, I only think we created two chances which was because of the conditions, so it was a difficult game all round.

“In the second half we created a few chances, one where the cross went in and they hit [their own] crossbar. We pressed much better in the second half and made it more difficult. Jez also had a good chance which the ‘keeper saved.

“We just have to be patient and then choose the time to quicken it up and get in behind them. The conditions and the wind didn’t help, the pitch was a bobbly too but obviously they’re playing on the same pitch.

“It was unfortunate not to get the win but there were a few young lads in the squad that stepped in and they did well which obviously keeps the unbeaten run going heading into the Walsall game.”

Pollard broke the deadlock with a 25-yard shot which arrowed into the top corner and with two of his three goals this season having come from outside the area, he admitted it was pleasing to see his practice pay off in a game situation once more.

“Carlisle were difficult to break down and luckily I got a good strike and obviously it ended up in the top corner,” he added.

“I think Jez [Jerome Jolly] whipped in the corner, they got two chances to clear the ball and they didn’t clear it. The clearance that ended up at my feet, I got a good touch to get it out of my feet and then I got my head over the ball and luckily it ended in the top corner which was a bonus.

“I do a lot of shooting outside the box in training and that’s something I’ve been working on to add to my game so I can get more goals with striking the ball and getting my technique better by making the ‘keeper work and hitting the target to give myself a chance of scoring.”

Nick Harrison’s team can now turn their attentions to facing Walsall in midweek, the Saddlers the visitors to UCLan Sports Arena in a 1pm kick-off on Tuesday afternoon.

And with the youth team now unbeaten in three since their FA Youth Cup exit last month, Pollard is hoping he and his team-mates can carry on building momentum ahead of hosting Walsall and then local rivals Blackpool on Saturday – the latter fixture a 10.30am start at the same venue.

“I think the game against Walsall, we just need to maintain possession a bit more, be more clinical in front of goal and obviously patience is key if the game isn’t going our way; just keep playing football and maintaining possession.

“We needed to bounce back after the FA Youth Cup game and get a winning streak going again because it was obviously a tough defeat to take. We’ve been getting the spirits back up in training and it’s all positive at the moment.

“We just need to take it game by game, we have Walsall next and then the big game at the weekend against Blackpool.”