Sean Maguire scored a dramatic winner in the final minute of injury time to take Preston North End level on points with the Play-Off positions. 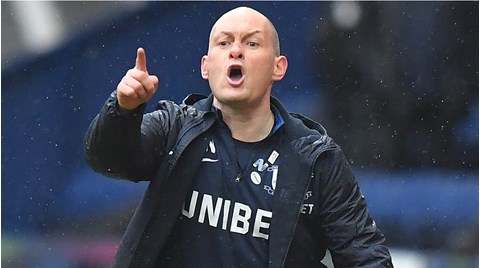 Alex Neil: “I Believe In These Players”

Only goal difference keeps the Lilywhites out of the top six after the Irishman headed home Daniel Johnson’s corner in the 94th minute.

In reality, it was a game that will not live long in the memory, played in torrential rain, with only two shots on target for Alex Neil’s men – the other coming in the chance that brought the winning corner – but none of that matters, as the result will still say 1-0.

The manager was without Alan Browne and Paul Gallagher for the clash with former Barnsley team-mate Gary Monk’s Birmingham City, but there was a return after four months on the sidelines for Callum Robinson and Louis Moult, who both were included on the bench.

The visitors started brightly and it took a superb save from Declan Rudd to keep the game goalless, a quarter of an hour in. Lee Camp played a huge long ball forward that bounced kindly for City’s top scorer Che Adams who found himself one-on-one with North End’s No.1, but the keeper came out on top to block the effort from the former Sheffield United man.

And the home custodian was certainly the busier of the two goalkeeper’s before the interval, needed again to push behind a 20-yard effort from Jacques Maghoma, after a corner was recycled out to the tricky winger on the left-hand side.

But PNE grew into the game in the final 15 minutes of the opening period, they were the better side. Just before the half hour mark Ben Pearson had a shout for a penalty, after dancing past three defenders, before a ricocheting ball was worked out to Andrew Hughes on the left. He drilled the ball into the feet of the starting Jayden Stockley, who spun and shot in the left-hand corner of the six yard box, but dragged his effort wide of the post.

In the final five minutes before half-time a returning Brad Potts saw a free kick blocked for his side’s first corner of the game and from Johnson’s resulting corner, Hughes saw a shot blocked, with Jordan Storey seemingly held back as he tried to poke the ball home.

With an hour gone, Robinson made his return, introduced for Potts to a great reception from the home faithful. However, it was others who were to be involved in the dramatic winner. 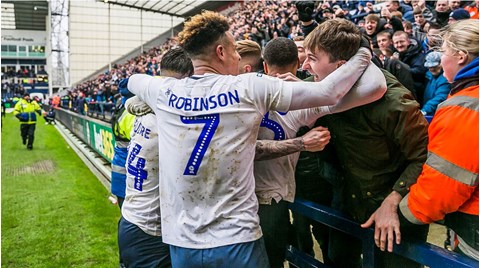 As the game entered the final of four minutes added on by referee Scott Duncan, there was a huge chance for a winner. The pace and determination of Ben Pearson picked up a partial clearance from Maguire, and the No.4 raced away down the right before pushing the ball inside the one tracking defender for Johnson to run onto. The former Aston Villa man was one-one-one with Lee Camp, but the Blues stopper made a superb save to force a corner.

Johnson himself went across to the right hand side of the Alan Kelly Town End goal-line and swung a deep corner into the back post to where the diminutive Irishman Maguire found himself in space to head home from inside the six-yard box to dent the home fans into delirium and secure the points that made it eight wins in 11 games and 12 games unbeaten overall.

Next stop on the rollercoaster, Reading in a fortnight… one not to be missed!