Preston North End manager Alex Neil has revealed that injured duo Billy Bodin and Josh Harrop have both been back in training for a few weeks.

Speaking ahead of his side’s final game of the season, as they head to face Brentford at Griffin Park on Sunday, the gaffer told iFollow PNE that the attacking pair were back, but would not be risked this season.

“We have had Billy Bodin and Josh Harrop back in training for a number of weeks now,” said Alex. “I could quite easily force them in, but I would be doing them a disservice as well if they broke down and had to start from scratch, so I am not going to take any unnecessary risks.

“It has been great to see them back. It is a long road when you are injured and it has been a full year for both of them and they have been sorely missed.

“We have needed their quality across the season, which unfortunately has not been available and they are good lads and a big part of the changing room here. Everybody is delighted that they are back and we want them to have a really strong pre-season and hopefully they can show their qualities next season.”

The team face the Bees in a 12.30pm kick-off to end their 2018/19 Championship campaign and the PNE chief says it is a tough one to end with.

“They are a good team,” he continued. “Going to Brentford is always difficult for anybody. You could see that when they played Leeds last week – who were themselves in good form – and found it really difficult.

“Our games with them have always been tight games since I have been here. Last season we went there and drew 1-1; they beat us 3-2 at Deepdale that season and this year it was 4-3 in our favour this season, so there has been very little in the games.

“They are a good side. They have a lot of very good young players and their style and method of play becomes difficult to deal with. 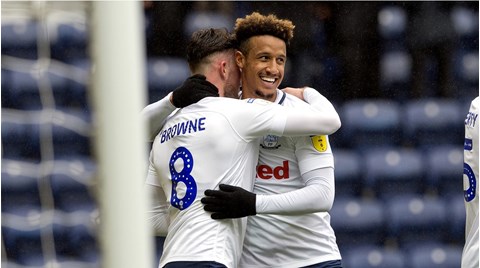 Callum Robinson Wants To Put A Smile On Fans’ Faces

“They have altered their style a little bit [under Thomas Frank] and it can be difficult to pin that style down. They like to cause you dilemmas when they have got the ball, in terms of who picks up who and where they drift on the pitch.

“But we have played against that formation before; it is not something that we have not come across, but as always, it comes down to how you play on the day, because Brentford are certainly the type of team that if you don’t bring your ‘A’ game and don’t get the intensity and make sure you work hard with and without the ball, they can really hurt you.”

It is the last chance for the players to impress the travelling fans the Scottish boss was keen to thank them for their backing this season.

“We have been particularly good on the road at times this season, which has been pleasing. Because for our proportion of fans who travel away is very, very high based on what our support is.

“We can’t thank them enough. It really does make a difference and help us on the road and hopefully they have been paid back by some of our performances and what we don’t want to do is to end the season on a poor one, so I am very hopeful we will go there and play well,” he added.