Alex Neil felt his side didn’t do the basics well enough or often enough in their 4-0 defeat to Hull City at the KCOM Stadium. 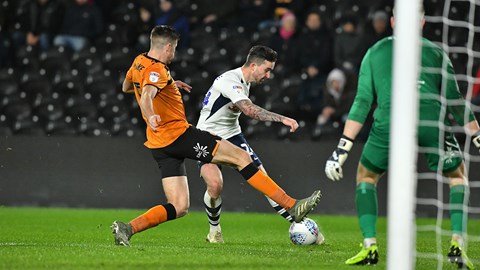 North End lost out to a Jarrod Bowen brace, Josh Magennis’ penalty and another goal from Kamil Grosicki in Humberside, despite hitting the woodwork twice themselves, inside five minutes through Sean Maguire and later on with returning substitute Josh Harrop.

The game remained goalless for the opening half an hour before Bowen’s opener and although the manager suggested there were parts of the game where the Lilywhites managed to contain their hosts, he said that wasn’t done consistently enough throughout the 90 minutes.

“I’m naturally disappointed to lose any game in that manner,” Alex told iFollow PNE post-match. “It’s extremely rare for me to talk about it because it’s never really happened since I’ve been here.

“To be fair, the one thing I will say for some of the lads is the fact that I’ve had to play players out of position – we’ve got one fit full back at the club, which is staggering considering we’ve got about five or six. Unfortunately, we didn’t have any of them available.

“Guys are trying to fill in and do the best they can and do those roles and it’s tough because we’re playing against arguably two of the better wide players in the league and we found it difficult. To be fair, for parts of it, we contained them and we looked a threat going forward.

“I think goals change games – Seani [Maguire] hits the post, I thought we had three or four really good counter attacks where we should have done better. They score once we release and it gets down the side areas and it becomes a problem.

“I think the disappointing thing is the second half in terms of not being hard to beat, not being hard to break down – that’s probably the hardest part to take, because in the main, we do the basics of the game extremely well and I felt at times tonight we didn’t do that. We made ourselves easy to beat, albeit I thought they were ruthless in front of goal.”

The gaffer was forced into a couple of changes from last time out at Derby County with Ryan Ledson starting at right back in the absence of the likes of Darnell Fisher and Alan Browne, along with the continued unavailability of fellow full backs Tom Clarke and Andrew Hughes.

“Alan Browne would have filled in at right back but he’s been missing, Ben Davies has been missing – all guys which would have played in a backline if they were available and unfortunately, they weren’t.

“The lads went in there, they did their best and unfortunately, against two very good wingers, it became a big problem for us. The one thing I will say is I’m certainly not laying the blame at anybody’s door; as a team, we needed to defend better and make it harder for their guys to get in those positions.”

With attentions now turning to the visit of West Bromwich Albion to Deepdale next Monday night, Alex admitted his team must respond after suffering back-to-back defeats.