Paul Gallagher felt the felt margins at play in the second half of North End’s 1-0 defeat against Derby County prevented them from taking a point from their trip to Pride Park.

The midfielder came off the bench at the break and having watched the opening 45 minutes from the dugout, he conceded that the first half display hadn’t been of the requisite quality.

However, with some decent opportunities in the second half and Tom Barkhuizen having a goal disallowed, the 35-year-old confessed to iFollow PNE that he felt there could have been a different outcome from the game on another day.

“We’re obviously disappointed to lose the game,” he told the club’s media channel. “I thought we didn’t start the game really well, Derby had us pinned back, but I think it was through a lot of mistakes that we were making ourselves. 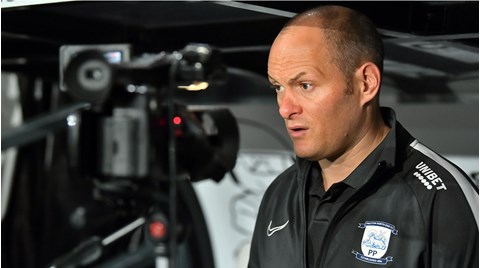 “I think from the side sitting on the bench you could probably see the goal coming, which was disappointing. I thought second half we showed a bit of character, we tried getting back into the game, chased the game, and we’ve come within inches of probably getting a point.”

The midfielder said there was an emphasis on having a greater control of the game upon his introduction for the start of the second half.

“He [the manager at half-time] just wanted to try to get on the ball, move the ball, get us further up the pitch by passing through the lines and I think we did that second half.

“Derby maybe had one or two efforts on the counter attack because we were leaving ourselves a bit open at the back because obviously we were chasing the game, but I thought second half the boys could be proud, we gave everything.

“We need to really play that way from the start, I don’t have to stand here and say it, the boys know it wasn’t good enough in the first half.

“With the backing we had from the supporters as well, we wanted to really send them home happy but in football you get another chance and that comes on Wednesday against Hull, where we need to dust ourselves down and get ready to go again.”

PNE’s No.12 also gave his view on Tom Barkhuizen’s disallowed goal just before the hour mark.

“Football is all about inches and we get one in the net, which is probably a carbon copy of their goal really; from a corner it gets flicked on, we keep it alive and put it in the net but the linesman has given offside – I don’t know if it was or not, but they’re the fine margins in football.

“I took a corner, I think Seani [Maguire] got a little flick maybe and I think it landed to Ben Davies – I think he should have scored himself without Tom touching the ball, but he didn’t make a clean enough contact so Tom had to do what he had to and put it across the line.

“Football has fine margins and that could have been either or, but unluckily for us it wasn’t. After that we had another opportunity with Jordan Storey, he hits the post, we had a few that flew in and around the box that were bouncing around and we just couldn’t get in the goal.”

With around 2,500 North End fans packed inside Pride Park, Gally saluted the away following to Derbyshire and hopes the team can put things right in front of another bumper travelling faithful on Wednesday night for the trip to Hull City.

“After a defeat, you just want another game to come as quickly as possible and in this division they do come quickly. 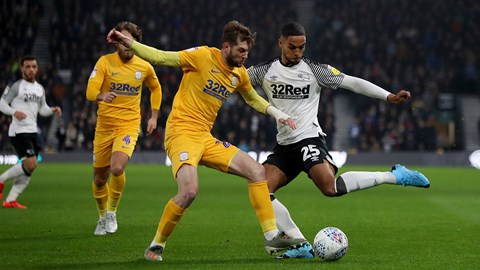 “We’ll have a debrief on this game I’m sure and then get it out of the system and get ready to prepare for Hull, which will be another tough game. Every time we’ve really had a disappointment, we’ve bounced back so we need to try to do that on Wednesday night.

“It’s another game, different opposition and a different way of playing. We’re disappointed tonight with the result and the performance of the first 45 minutes, but we’ve got to take the positive from the second half; we penned them in, we tried and gave our all like we always do and we go again Wednesday.

“The support we had here was fantastic all the way to the final whistle and if they can see the effort the boys are putting in, especially second half, they will back you all the way and if we can get the same kind of following on Wednesday, we want to try to put it right.”

Watch more from Gally now by clicking on the video above.