Paul Gallagher says Preston North End will not be getting carried away after their 1-0 away win against Charlton Athletic took them to the top of the Championship table.

The 35-year-old dispatched a 58th-minute penalty to seal all three points for Alex Neil’s side, taking them to the summit of the division with previous leaders West Bromwich Albion not playing until Monday.

Despite that, the midfielder told iFollow PNE post-match that the team would simply be switching their focus to the next game as they look to continue their fine start to the campaign.

“The most important thing was the three points.,” said North End’s No.12. “We knew if we got the three points we could potentially go top of the league and it’s a good feeling, but we’re not going to get carried away.

“It’s a tough venue to come when they play with that energy and they’ve done well this season, they’ve beat some big clubs.

“We have to take care of ourselves and to come away with three points which puts us top of the league but we’ve got to keep going and see how far we can take it.

“A lot of people want to see free-flowing football, but sometimes you need to roll your sleeves up, dig in, turn a few balls, battle and I felt we saw that today.

“Patrick [Bauer] coming back here today was immense and won every header, him and Ben Davies, Jayden Stockley up front was a real handful and the runners from midfield.

“We put in a real professional performance, we knew we had to, it’s a difficult place to come and we knew the reward would be big.

“There’s a long way to go so we aren’t getting carried away, we can enjoy it and I’m sure the fans will enjoy it, but we look onto the next game now.”

After being hooked after half an hour in last week’s win over Blackburn Rovers as part of a tactical change, Gallagher himself came off the bench at around the same time in this game, replacing the injured Daniel Johnson and in the process taking over penalty duties.

"I’m at an age now where I understand what the manager wants and as a player on the pitch, I could probably sense we needed a target man last week. At the end of the day, you want to win, if you have to be sacrificed it’s one of them and we go on and win 3-2. 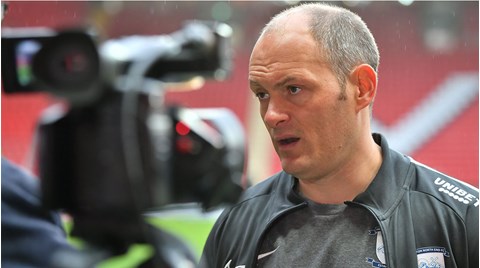 Alex Neil ‘Delighted With The Lads’

"Today I’m on after 25 minutes, DJ [Daniel Johnson] picks an injury up but if I can play a part in any way, shape or form, whether it’s on or off the pitch, I’m happy to do that

“I’ve took penalties for a long time, me and DJ are quite good at taking them, so it’s good to have those two options,” he added. “Being the older statesman, you take responsibility and thankfully for us it’s gone in the net.

“I felt we deserved it because we were knocking on the door, we had a few opportunities - obviously Jayden’s header, the ‘keeper tipping it onto the bar, and then [Tom Barkhuizen] Barky goes through at the end and probably should square it to Ben Pearson and kill the game off at 2-0.

“I think it was just a real pro performance, hardworking team, we want to fight for each other and when you do that, the rewards come your way.”

Gallagher also gave his thoughts on the off-field matters which became prevalent in the lead-up to the game.

“There’s speculation always circulating and it’s about being professional and keeping your head.

“We know we have got a loyal manager here who had the opportunity last year to go somewhere, but he believes in this group of players and these players love playing for him. When you add that together it’s a recipe for success, so long may that continue and all the boys were delighted when the statement came out yesterday.

“It makes us concentrate on the football and today you’ve seen that with a real determined performance.”