It was March of this year the last time Saturday’s match official, Tim Robinson, took charge of the Lilywhites, the goalless draw at home to Nottingham Forest.

21 November 2019
Prior to that, we saw the referee in December 2017. That game, a 1-0 win at home to Sheffield United, saw Robinson as the man with the whistle at a PNE game, for the second time in three weeks.
Tim, from West Sussex, in his eighth year on the EFL list and was the match official for the 1-1 draw with Norwich City at Carrow Road in November that same season.
Before that, he last took charge of North End in his first trip to Deepdale, when we overcame Birmingham City 2-1 back in March of the previous season.

That was his fourth game overall in charge of the Lilywhites, the others all being away trips; Brentford, Ipswich and a 2-0 victory at Coventry City when Joe Garner and club captain Tom Clarke were on the scoresheet. 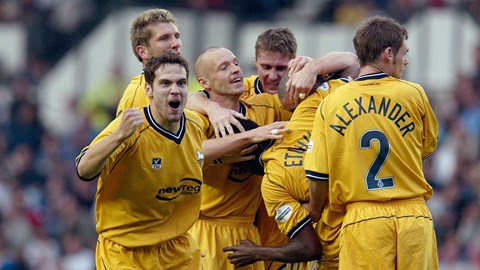 We’ve Met Before: Derby County Away

21 November 2019
This will be his 12th game of the season, his last being table-toppers West Brom’s 2-0 win at Stoke City, in front of the Sky Sports cameras three weeks ago. This season he has issued 35 cautions and one red in those previous 11 games.
This is his second Derby game of the season, having overseen their 2-2 away draw with Stoke City back in August.
The assistants on Saturday afternoon will be Jonathan Hunt and Mark Jones, whilst the fourth official assigned to the game is Alan Young.