Preston North End manager Alex Neil says that he will never play down the importance of a derby match, rather embracing the extra excitement they bring.

24 October 2019
The Lilywhites entertain Blackburn Rovers at Deepdale on Saturday afternoon and the gaffer is well aware of the way the supporters look at games such as this one.
Speaking to iFollow PNE to look ahead to the game, Alex said: “Derbies are for the fans. We want to get the three points, that’s what is important to us.
“Most people play it down, in case you lose it and the natural disappointment that comes with that, but I think you have to embrace it. It is one of those games the fans want to win, we want to win and it means a lot to them.

“It is important to stress the importance of the game to the fans. The atmosphere will be a little bit different; both sets of supporters will be desperate to beat each other and the atmosphere for the last two games at their place and ours was excellent and it is the type of game the fans talk about.

24 October 2019
“You can beat the top of the league, but they won’t be talking about it a month later, they will be taking about the game they beat their local rivals. It is not lost on me the importance of it to the fans – I understand what it means to them and we will be working very hard to get the bragging rights and another three points.
“It gets the community and the place buzzing. They know there is a big game coming up, they all want tickets to it and they all want to get one over on their local rivals.
“I am sure a lot of people will be working with Blackburn fans and derbies are the lifeblood of football - people speak about them regularly.
“In Scotland we have one of the best in the world with Celtic versus Rangers and at any club embracing the derbies is really important.”
Rovers come into the game having lost a couple of very good defenders in recent weeks through injury in Darragh Lenihan and former PNE favourite Greg Cunningham and the Scot believes it is something that will have frustrated his opposite number.

“Missing key players anywhere in your squad is detrimental to what you are going to be doing. I am sure that will be really frustrating to Tony and to the lads who are injured. 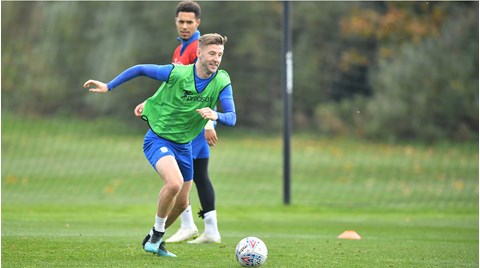 Paul Gallagher Ready For A Bit Of Stick

24 October 2019
“It makes his job doubly difficult and the one thing with football is that there is sympathy for about five seconds and then it goes away and everyone expects you to go and still win the games.
“It is tough when you lose key players, I have found that since I have been here, but thankfully our injury record this season hasn’t been too bad and that has certainly helped us to get where we are and I am sure Blackburn will want to get their lads back as quickly as possible.”
The Rovers boss is a manager who goes very much ‘horses for courses’ and picks a side and a formation to suit the game, so does this make Alex’s job harder when doing his own preparation?
“Although Tony will flip personnel and patterns, it is similar – depending who the personnel are will dictate the patterns, a bit like ourselves.
“Tony is an excellent coach; an experienced coach. People have short memories – he has done an excellent job since he went there.
“They went down, but they were really struggling and he turned them round and then he got them promoted and made them a force in the Championship, so given time he will get them going again,” he added.