Preston North End manager Alex Neil says that his job at the moment is made easier by the work of the players on the training pitch.

17 October 2019
The PNE boss gave his group an extended rest during the international break, but with players back from injury he has plenty of decisions to make this weekend.
The clash with Reading will see Darnell Fisher and Andrew Hughes both available again, but Alex says that it is the players who are the ones who have all the work to do.
“We had quite an intense period; a lot of the lads played a lot of minutes,” he told iFollow PNE. “We needed to top some of them up and get a bounce game in – which we did – and other lads needed to rest and recover and we have come through that well and hopefully we can now get a couple of decent sessions in and get ready for the game.
“I am big on balance in terms of liking guys who can offer a left foot on the left-hand side, but I have not noticed that at all with Joe [Rafferty] slipping in there. His left foot is very good, his positional sense is good, so it is not a concern for me.

“My job when I go out onto the training field is easy; I watch them all train as hard as they can and the guys who are the best players, who do the best in training, who apply themselves and have the most effect on what we do will be given an opportunity and when they do, it is up to them to do it in front of everybody.

17 October 2019
“There is always difficult decision to be made, because there is very little between some players and what I have to do, is to make a decision make on the game, on form, on all the things behind the scenes that people don’t see, like how fresh they are, how they are looking in training and then make the best decision on how they are going to play.”
The clash with the Royals will be the first with Mark Bowen as manager for the hosts and Alex admits that it will slightly affect his preparations.
“It probably alters it in that we don’t know how they are going to play or what the personnel is going to be, so from that perspective we will concentrate more on how we are going to play,” he continued.
“When a new manager takes over there will be a clean slate for most players and it is then up to them. Depending on how they train, how they play and how they behave, will determine whether they will be involved in the squad or not.
“Here we don’t have any issues like that, because the attitude of our lads is excellent and there is no need for me to fall out with anybody. But as most managers will say, that is determined by the players, because if you are trying to help them do their job and they are not paying attention or they are being awkward, that proves to be a difficult situation.
“I am sure now that they will have players who will be looking seeing it as a clean slate.

“Mark will have watched all their games, so there won’t be any surprises for him going in there. He will know the dynamic of the group; the strengths and weaknesses of the players and it will allow him to hit the ground running in selecting his first team.” 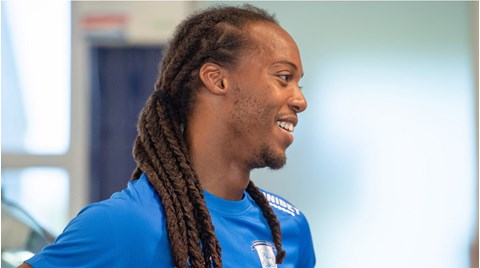 17 October 2019
The first game after a two week gap is the start of a period of five games – three at home, two away – before the final break of the calendar year, but for the gaffer, he is only looking as far as the Madejski Stadium.
“We don’t want to get ahead of ourselves. That is how we have approached the season so far and our most important game is Reading now.
“We focus on that and then once that one is out of the way then we will move onto the next one.
“There are certain places that you go where you haven’t got a good record and other places where you do and I don’t think it really matters on the day.
“It is how you go and perform and how they go and perform and hopefully, like our lads have done so many times this season, they can make the difference and if that is the case, we will look forward to the trip.
“This year, in every game we have played, we have felt we are capable of winning and that is a great feeling to have as a player and as a coach. At the moment we don’t fear anyone and we think that if we perform as we can, we have a good chance of winning the game and this game is no difference,” he added.