Alex Neil praised his “magnificent” side for turning over a two-goal deficit in this afternoon’s Lancashire derby against Blackburn Rovers.

Neil’s men were two goals down inside just 11 minutes, but goals from Tom Barkhuizen either side of a Daniel Johnson penalty ensured they took all three points and maintained their unbeaten home record in the Championship this season. 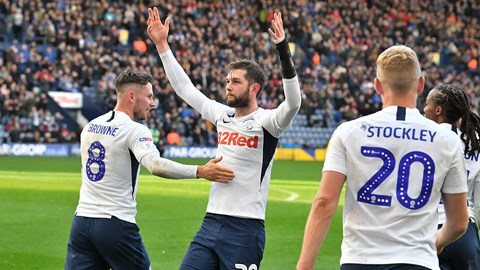 Things certainly weren’t going to plan for the Lilywhites and it was a bold decision for Neil to make on the half-hour mark as he brought Jayden Stockley on for captain Paul Gallagher.

Speaking to iFollow PNE, Neil said: “First half, we know as a group it was unacceptable. We were second to every ball, we lost every header and credit to Blackburn – they were far, far better than us.

“I’ve got a difficult decision after 30 minutes because the game’s still not going our way – it’s going their way all the time. I had to take a player off, Gally [Paul Gallagher], which is difficult, but then I thought it was okay to half-time.

“I thought the players were magnificent really second half – they were really aggressive, their intensity went through the roof and I think they got the vibe, as I did, that at half-time, the fans weren’t happy. I wasn’t happy and they weren’t happy and we needed to do something about it, which we did.

“I felt I did my bit, the players did their bit and we can all go home happy – it wasn’t like that for the first 20 minutes, I can assure you, but we are now.”

Derby day always adds an extra something to the occasion and Neil felt that his side perhaps lacked that bit of edge in the opening 45.

Neil added: “I think it was just the hunger, intensity and drive that we lacked in the first half. We didn’t have any of that and that was maybe because we wanted to try to play and pass and rotations and all that sort of stuff.

“Sometimes football is quite simple – be aggressive, win your tackles, win your headers and make sure that you’re on the front foot. That really put us on top of the game second half.

“I couldn’t be any prouder than I was today, because as a footballer, having been there myself when you’ve played poorly, to turn it round in the manner which we did is extremely difficult so they deserve all the credit that comes their way.”

Barkhuizen’s two goals this afternoon leaves him with a tally of seven now for the season and his manager was full of praise for the forward.

“Tommy B [Barkhuizen] is a fantastic finisher. Sometimes there maybe isn’t as many opportunities to see that because he plays off the side, but that just typifies it.

“We do a lot of those types of passing and shooting drills in training and to see that bend into the top corner really topped off the day.

“The fact is, the lads that are playing need to contribute with goals and assists – that’s what’s demanded of them. They need to keep their levels high and they did that second half so that was great.”