Billy Bodin returned to the bench as the Lilywhites came from 2-0 down at half-time to beat local rivals Blackburn Rovers last weekend. 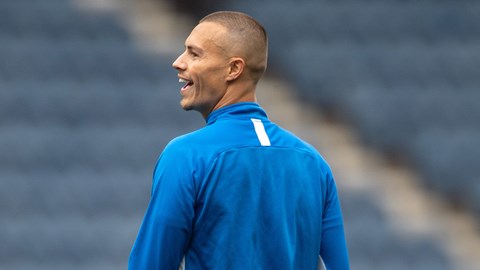 29 October 2019
And to add to the joy of a derby day win, just days later he put pen to paper on a new contract, extending his stay at Deepdale until at least the summer of 2021.
The Welsh winger spoke to iFollow PNE after completing the paperwork on his new deal and admitted it was something he was pleased to get sorted.
“It is something that me, my family and the club have been trying to get sorted for a while, so to get it done is great.
“On the pitch it is going fantastically well. The lads have been doing great this season and I can’t wait to try and get back in the team and focus on the league.

“I think I have only shown glimpses [of what he can do] and have picked up a few niggles this season, so now I want to try and show the fans what I can do and try and be as consistent as I can. My main aim is to get back in the team and back doing what I did at the start of the season either creating or scoring goals.

“It has been a bit stressful picking up a few niggles, but hopefully I can kick on now. Most people, whenever they have been out for a lengthy period, do get the odd little niggle. Because you have worked so hard on one area, you ten to pick up other issues in different muscles, which is frustrating, but you just have to look after yourself and do the best you can in the gym to keep fit and get yourself ready for matchdays.”
As previously mentioned, Billy returned to the matchday squad for the weekend’s thriller against Rovers and even watching from the bench he enjoyed what he saw.
“Any derby is good to be involved in,” he continued. “To come away with all three points was massive for us. The character of the boys in the second half was massive and with all the fans behind us it was a great atmosphere and there is nothing better than getting a victory in a derby.
“A few of the boys have spoken since about the fact that even coming in 2-0 down at half-time, it felt as if we were going to go on and draw or win the game. The character of the boys is a credit to them and they knew they were going to get something from the game.
“Each game the lads have been confident and even if we have gone a goal down, it feels as if it is no big deal and that we can get back into it. The belief and the character is there and we just have to keep that going and see where we are at the end of the season.
“There was no celebration when we equalised, we just got the ball and got ready to go again and that shows how much the boys believe in each other. The training and everything we do off the pitch creates that motivation to try and win every game and it was a great performance in the second half.”
With another week’s training under his belt, the Swindon-born 27-year-old will be hoping to be involved again when the side travel to face Charlton Athletic at the weekend and he is well aware of the threat they will pose after an excellent start to life back in the Championship by the Addicks.

“I have played against them a couple of times in League One and they have always been a decent team. They have been flying this season. They have been missing their main striker, Lyle Taylor, but have been scoring goals still and picking up points.

“They are going to be a good team, especially at home, so it will be a tough game, but I am sure the lads will be up for it and hopefully we can get the win.
“When the team’s doing well there is no reason for the fans not to come in their numbers, but fair play to them to get up at 4.30 in the morning to travel down to London. It shows the lads are doing something right and we will be doing our best to try and reward them for making that trip," he added.