Preston North End attacker Billy Bodin has agreed a new contract keeping him at the club until at least the summer of 2021. 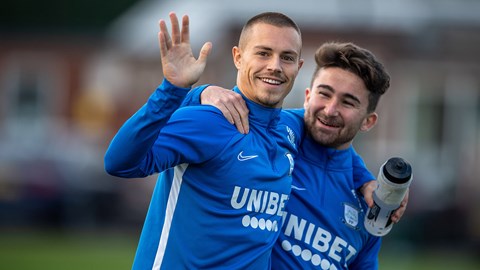 Billy Bodin On Contract, Return From Injury And Charlton Athletic

29 October 2019
The Lilywhites’ No.39 would have been out of contract in the summer of 2020, but has put pen to paper on a new deal, extending his stay at Deepdale.
Since signing in January 2018, the Welsh winger has gone on to score three goals in 27 appearances, but missed the whole of the 2018/19 season after suffering an ACL injury in the week prior to the start of the campaign.

He has returned this season, grabbing his first goal since the year out in the 1-1 draw with Nottingham Forest in late August and was back in the squad after a slight injury for the weekend’s derby day comeback victory over Blackburn Rovers.

Speaking after signing on the dotted line, Billy said: “It is something that me, my family and the club have been trying to get sorted for a while, so to get it done is great.
“On the pitch it is going fantastically well. The lads have been doing great this season and I can’t wait to try and get back in the team and focus on the league.
“I think I have only shown glimpses [of what he can do] and have picked up a few niggles this season, so now I want to try and show the fans what I can do and be as consistent as I can, either creating or scoring goals.”