Preston North End midfielder Daniel Johnson has started the season in fine form and is looking to continue that after the international break.

17 October 2019
The Lilywhites’ No.11 already has seven goals and five assists to his name, plus the player of the month award for the opening few weeks of the season and after a few days off, he is ready to push on again.
Speaking to iFollow PNE at Springfields the former Aston Villa man said the team were ready for a contest at the Madejski Stadium.
“We needed the break,” said DJ. “We played so many games in such a short period of time, so we needed to recharge the batteries and get ready for this next batch of games.
“I remember we have not had the best of luck there, but we are in a good little place at the moment and hopefully we can continue that.

“We want to better our away record, on the road, and we will be looking to go down there and get three points.

17 October 2019
“We want to fight fire with fire and if the opposition are up for that, then we are ready for it. We are going to go down there full of confidence and go for the win.”
The change at the top for Reading means that the team’s preparations are very internally focused this week: “It is always difficult going to an opposition when they have got a new manager in,” he continued.
“It will be difficult for us and the manager to know what they are going to bring on the day, but ultimately we just have to concentrate on what we are going to do.
“We can’t really focus on them too much, we just have to try and go out there and put another performance on.”
After a blistering start to the campaign, the 27-year-old feels the squad still have more to come and after the enforced interval, he is sure they are ready to face the next few weeks with confidence.
“The batteries are recharged and I am ready to get going and keep pushing on. Right now, we are third in the league and hopefully we can stay there and go one or two better. 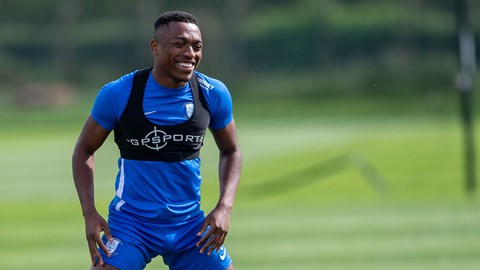 17 October 2019
“We are up there at the moment and we want to stay up there. These next batch of games are going to be really important to us. We have some good games coming up with three at home and two away, so we could pick up some really important points.
“The pleasing thing for us is that we have the majority of the squad available. If we can keep most of the squad available, then we will have a really good chance.
“People are going to be upset they are not playing, but that is part and parcel of football. You never know when you are going to get called upon to come into the team and do a job and if you do, hopefully you can stay in the team and keep the shirt.
“The really good thing for us at the moment is that most players are fit and they are pushing to be in the team.
“What has been happening since the season started is that the players not in the team are pushing those playing to keep at a high level of performance.
“We have kept most people fit, we have had no suspensions – hopefully that continues – and I am delighted we are in a really good place at the moment and just want to push on now,” he added.